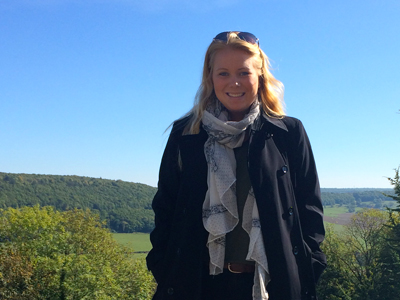 Although graduation is half a year away, Maddi Durbin ’16 probably can’t be blamed for having a foot out the door. The senior has travel in her blood, as evidenced by her major in international relations (IR) and double minor in geography and global political economy. Not even the hallowed halls of campus, where she takes classes in both the College of Arts and Sciences and the Maxwell School of Citizenship and Public Affairs, can contain her excitement.

“Maddi has that rare combination of a deep passion for international relations, an unusually sophisticated understanding of complex ideas and superior academics,” says Terrell Northup G’87, assistant professor of IR in the Maxwell School. “I have no doubt that she will not only be successful in her pursuit of a law career, but also that she will find creative and powerful ways to have a positive impact wherever she puts her energies.”

After graduation, Durbin plans to spend a year in Africa, before enrolling in law school. Her goal is to have a career in human rights and social justice. “I want to become a defender of human rights, worldwide,” she says. 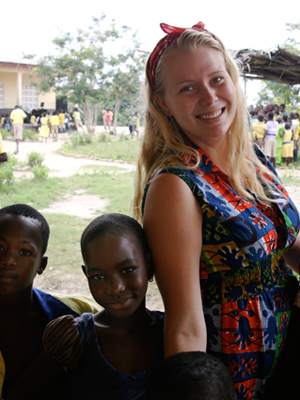 Durbin spent time in Africa as a volunteer teacher.

Durbin attributes her social justice leanings to her Quaker high school in Philadelphia, where she was taught to ask hard questions about big problems. This trend spilled over into Durbin’s freshman year at Syracuse. All it took was one class with Northrup to convince her to major in IR.

“I had such a positive experience with Professor Northrup that I knew [IR] was what I wanted to do,” recalls Durbin, who also is a member of the Renée Crown University Honors Program, based in the College of Arts and Sciences. “She, more than anybody, really stimulated my interested in the field.”

As a result, Durbin has established herself, both on and off campus. Already, she has racked up thousands of airline miles from studying abroad at SU Strasbourg in France; interning at the U.S. Department of State in Washington, D.C.; and volunteer teaching in Ghana in West Africa.

No doubt that the University has helped shape Durbin’s inclusive worldview.

“My favorite thing about Syracuse is the sense of community,” she adds. “Even though the student body is big and diverse, almost everybody seems to take pride in the University. This feeling is palpable everywhere I go on campus, and is something I want to take with me after graduation.”