‘I Learn America’ to Be Screened Sept. 30

The School of Education will host the first installment of the Douglas P. Biklen Landscape of Urban Education Lecture Series on Wednesday, Sept. 30, at 7 p.m. in Gifford Auditorium with the screening of the documentary film “I Learn America.” 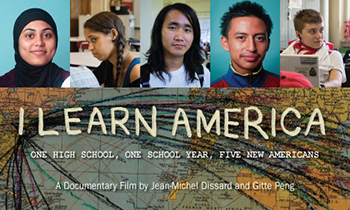 Immediately following, filmmaker Jean-Michel Dissard will participate in an open discussion with the audience. Students featured in the film, Sandra and Sing, will also participate in the discussion. The event is free and open to the public. CART (Communication Access Real-time Translation) services will be provided, and the film is captioned. This event is supported by the Lynn D. and John L. Kreischer TELL Scholars Lecture fund.

In the United States, nearly one in four children is an immigrant or was born to immigrant parents. Classrooms are meeting a growing influx of students who are English language learners, who may be unfamiliar with American culture and, in some cases, lack formal education. In the feature-length documentary “I Learn America,” five immigrant teenagers come together over a year at the International High School in Brooklyn and learn about their new country. The International High School is a New York City public school dedicated to serving newly arrived immigrant teenagers, with more than 300 students speaking two-dozen languages from 50 countries. The students strive to master English, adapt to new family structures, confront the universal trials of adolescence and search for a stable future. The film follows them over a school year in, after and outside of school, to experience first hand the many difficulties of coping with a foreign culture and contending with adolescence.

Dissard has always been creatively involved in the critically acclaimed films he’s produced, including: “Raising Victor Vargas,” “Rikers High” and “Ezra.” He also co-wrote and produced “Down to the Bone” by Debra Granik. Recently, Dissard wrote a TV series in Paris derived from workshops organized with French immigrant teenagers. Through his company, Dissard sells and distributes internationally award-winning short films. Eight films from Dissard’s catalog premiered in Cannes, and six films have won major prizes in Sundance. He is on the advisory board of Cine-Institute, the only film school in Haiti. Originally from France, Dissard immigrated to America when he was a teenager.

Since 2005, the Landscape of Urban Education Lecture Series has been dedicated to the presentation of current ideas and strategies for navigating urban education terrain in the United States. The speakers engaged for this series are renowned scholars committed to revitalizing inclusive urban education.

A generous gift by School of Education Board of Visitors member Jeryl Mitchell ’81, G’83 named the lecture series in honor of Dean Emeritus Douglas P. Biklen. This will allow the lecture series to continue its mission and expand its audience and national reach for many years to come.