The joys, madness and rewards of working in the theater, onstage and off, are celebrated in “Kiss Me, Kate,” a heralded musical that can be rightly called a Broadway treasure. Taking its inspiration from Shakespeare, “Kiss Me, Kate” follows the antics of two feuding romantic couples during a touring production of “The Taming of the Shrew.” Sparkling with 18 classic Cole Porter songs—including “Another Op’nin’, Another Show,” “Wunderbar,” “So in Love,” “Always True to You in My Fashion,” “Too Darn Hot” and “Brush Up Your Shakespeare”—”Kiss Me, Kate” epitomizes the Broadway musical comedy at its irresistible best. 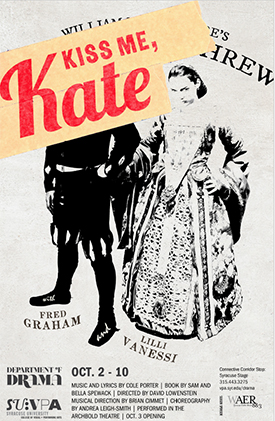 Set in Baltimore in the 1940s, “Kiss Me, Kate” follows two divorcees’ who struggle to part from their relationship drama offstage. As professional actors, the couple attempts to hide their issues from the main stage, only to get caught up in the mix of these problems. Tempers fly and petty arguments erupt, causing comical outcomes for everyone involved. This play within a play truly captures the hilarity that ensues when two egos fight for the same spotlight.

Directing the SU Drama production of “Kiss Me, Kate” is David Lowenstein, an alumnus of SU Drama and professor of practice in the musical theater program. His professional SU Drama credits include direction for “Seussical!” and “Oklahoma” and choreography for “Lucky Stiff” and “I Love You Because.” Before moving to Central New York, Lowenstein co-created and choreographed “Shout! The Mod Musical,” which ran in London and Off-Broadway, and his choreography was featured in the Drama Desk award winning Howard Crabtree’s “Whoop-Dee-Doo!,” “On A Clear Day You Can See Forever,” “Anything Cole” and “Sing For Your Supper.” He has taught at SUNY Cortland, CAP 21/NYU and Le Moyne College.

For more information about “Kiss Me, Kate” and SU Drama’s 2015/16 Season, visit http://vpa.syr.edu/drama