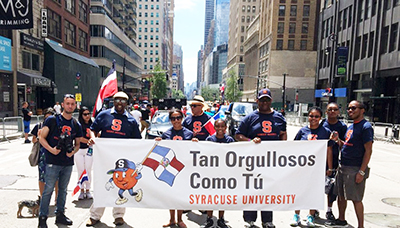 Last month, Syracuse University was  represented at the Dominican Day Parade of New York City, an event which celebrates Dominican culture and pride. English Professor Silvio Torres-Saillant helped organize the group and was a member of the board that planned the parade.

Executive Director of Development and Alumni Relations Miguel Sapp and  Manager of Alumni Programs Angela Morales-Patterson responded quickly to the an invitation to the University to join this year’s parade as a sponsor. They pulled together a sizable cohort of marchers who displayed SU’s colors and distributed SU memorabilia.