Michael Gursha ’10, an entrepreneur, mentor, angel investor and successful executive, has joined the Newhouse School of Public Communications as the school’s inaugural entrepreneur-in-residence. He brings with him vast experience and expertise in startups and new business ventures. 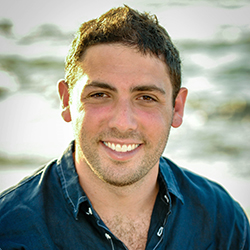 “The entrepreneur-in-residence position is an important addition to the efforts we have made at Newhouse to be the leading media entrepreneurship program at the pre-eminent communications and media school,” says Newhouse Dean Lorraine Branham. “Michael is the ideal person to help continue this effort.”

“Michael will work with students one on one and in small groups to help them develop, expand and scale startups and new business ventures,” says Sean Branagan, director of Newhouse’s Center for Digital Media Entrepreneurship, who created the program. “He is particularly well connected and experienced in the venture and startup worlds, especially from his work in Silicon Valley and New York. Michael will also have the opportunity to work with faculty to find ways to infuse entrepreneurship into various Newhouse courses, as well as work on new and emerging entrepreneurship initiatives with the center.”

Gursha comes to Newhouse from Curemark LLC, a New York-based biotech company focused on the treatment of autism and other neurological disorders, where he served as vice president of strategic initiatives. Gursha was one of the initial team members at Curemark and, over the years, held various positions with the company, including director of business development.

Early in his career, Gursha’s interest in technology led him to Google, where, at age 18, he spent two summers working in new business development at the Mountain View, Calif., headquarters. During his time there, he assisted the team responsible for improving the Google Search Index and supported the director of business development on early-stage partnerships for Google Health. He later spent several months at Time Inc. Home Entertainment, working mostly on new product development with major brands such as People, InStyle, Sports Illustrated and Time magazine.

While a student at the University, Gursha co-founded the social media startup VouchBoard and was a founding team member of Dream Water, which won first place and $25,000 in the Panasci Business Plan Competition.

“I’m extremely excited about the opportunity to give back to a place that has given me so much,” says Gursha. “Newhouse is the leading media and communications school and has some of the smartest, most creative students in the world. I believe the next Snapchat, Twitter or Maker Studios can and will be created at the Newhouse School. I want to help students get the necessary advice and expertise to make this a reality.

“Also, this entrepreneur-in-residence position will give me the time, space and resources to explore many of my new ideas. I am looking forward to meeting students and faculty, interacting with researchers and auditing some of the amazing courses the university has to offer.”

Gursha will hold regular office hours, lecture at Newhouse and other schools and colleges on campus and work with students and faculty on their ventures during the academic year.