Syracuse Stage will be holding auditions for local children ages 9-13 for the roles of Scout, Jem and Dill in “To Kill a Mockingbird.” Auditions will be held at Syracuse Stage, 820 E. Genesee St., on Oct. 5 and 6. To schedule an appointment, call Chris Botek at 315-443-4008. 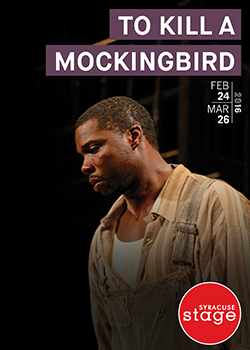 Selected actors will have the opportunity to work with professional cast members and other artists from around the country.

“To Kill a Mockingbird” is Harper Lee’s classic American story of courage and justice. In a small Alabama town, a black man, Tom Robinson, stands falsely accused of raping a white woman. Many townspeople would see him condemned, but attorney Atticus Finch defends Tom and demands justice. Through the trial, Atticus’ children Scout and Jem and their friend Dill come face to face with the reality of racism in their small town. The show runs Feb. 24 through March 26.

ROLES TO BE CAST

Scout: Looking for girls aged 9-11, Caucasian, to play an impulsive, precocious and spunky 9-year-old girl who lives in Alabama. Innocent and caring, she eventually awakens to the injustice and racism that surround her.

Jem: Looking for boys aged 12-13, Caucasian, to play the responsible older brother of Scout. Jem is a self-assured, perceptive and brave adolescent from Alabama.

Dill: Looking for boys aged 10-12, Caucasian, to play a boy who is small in stature. Dill is a 10-year-old friend from Mississippi. He is confident, wise and has an active imagination.