18th Dollar Day at the Dome Set for Saturday, Sept. 26

Before the football team kicks off against Louisiana State University at noon on Saturday, Sept. 26, more than 150 Greek Life students will be stationed at Carrier Dome entrances, on the Quad, in parking lots and across campus wearing bright orange caps and holding orange buckets, greeting fans and soliciting donations for the United Way of Central New York. 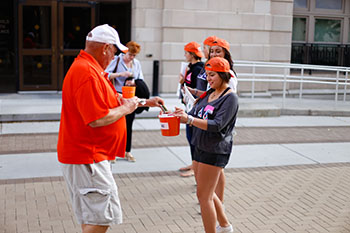 Greek Life students collect donations from fans outside the Carrier Dome on last year’s Dollar Day at the Dome.

Dollar Day at the Dome is an annual fundraising event, a vital part of the University’s annual United Way campaign.

Fans are encouraged to donate to the “Game Changer”-themed event. Patrons who give will be investing in the 92 local programs and services at 34 local agencies funded by the Central New York United Way.

This year marks the campus’ 44th annual employee-led United Way campaign on campus. The fall campaign begins with the distribution of pledge cards to all staff in early October and continues with creative fundraising events through the end of the year. Annually the staff campaign raises an average of $210,000 for the United Way of Central New York.

Dollar Day gives students an opportunity to participate in the University-wide campaign and raise funds for the community.

“Students will be out 90 minutes before kickoff, visiting tailgates and stationed at key areas, collecting donations from fans,” explains Peg Northrup, campaign and event manager. “We want to encourage fans to look for the orange United Way buckets and help us help our community.”

Pete Sala, University vice president and chief campus facilities officer, and Dr. Ruth Chen, professor of practice in the College of Engineering and Computer Science, are co-chairing this year’s campaign. The pair lead a cross-campus committee of staff volunteers who help publicize the campaign and communicate the benefits of pledging.

For more information on Dollar Day at the Dome, or the campus campaign, visit the University’s United Way campaign website, or contact Northrup in the Office of Government and Community Relations, at 443-5303.