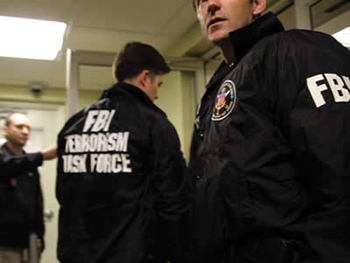 “The Syracuse University Human Rights Film Festival is a fall tradition on campus, as well as a signature event of Syracuse Symposium,” says Vivian May, director of the Humanities Center and professor of women’s and gender studies in Arts and Sciences. “This year’s lineup is particularly strong, using critically acclaimed independent films to explore issues of social justice around the world. My hope is that this festival—and Syracuse Symposium, in general—will stimulate a sustained dialogue about these issues and ways they may be addressed.”

SUHRFF kicks off on Thursday, Sept. 24, with a screening of “(T)error” at 7 p.m. in the Melanie Gray Ceremonial Courtroom of Dineen Hall. Directed by Lyric R. Cabral and David Sutcliffe, the film is the first to capture an FBI counterterrorism sting operation as it unfolds. With access to informants and suspects, the 2015 documentary exposes how the FBI incites targeted suspects to pursue criminal activity in order to entrap them on terrorist charges, posing the question, “Who is watching the watchers?”

Cabral and Sutcliffe will introduce the film and afterward, will participate in a panel discussion with William Banks, interim dean of the College of Law, professor of law and of public administration and international affairs, and founding director of the Institute for National Security and Counterterrorism (INSCT); Nathan Sales, associate professor of law; and William Snyder, visiting assistant professor of law.

“'(T)error’ is a thrilling and eye-opening documentary about the domestic surveillance apparatus,” says Roger Hallas, associate professor of English in Arts and Sciences, who co-directs SUHRFF with Tula Goenka G’86, professor of television, radio, & film in the Newhouse School. “We’re delighted to bring together its filmmakers with esteemed experts from the College of Law for what promises to be an equally enlightening discussion after the film.”

Opening night is co-sponsored by INSCT in the College of Law and the Department of Political Science in the Maxwell School.

Public parking for the event is $5 in the Irving Garage on Stadium Place.

Another highlight is a screening of the 2015 documentary “Overburden” on Friday, Sept. 25, at 7 p.m. in Shemin Auditorium. When a coal mine disaster kills her brother, a pro-coal activist teams up with a staunch environmentalist to take on one of the nation’s largest coal companies. The film’s release coincides with the five-year anniversary of the Upper Big Branch Mine explosion, the largest mining disaster in over 40 years and a major plot point in the film.

Director Chad Stevens will introduce the film, as well as participate in a panel discussion afterward with Matthew Huber, associate professor of geography in the Maxwell School.

SUHRRF concludes on Saturday, Sept. 26, with a screening of “Margarita, With a Straw” at 7 p.m. in Shemin Auditorium. Presented in Hindi and English with English subtitles, the 2014 film is about a young woman with cerebral palsy who leaves India to study in the United States, only to unexpectedly fall in love. 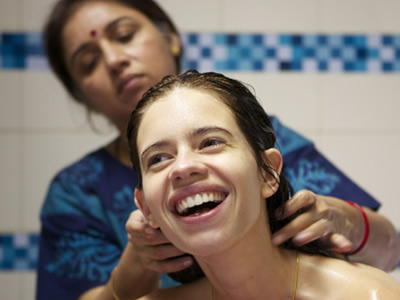 A still from “Margarita, with a Straw”

“In light of the 25th anniversary of the Americans with Disabilities Act, we are proud to close our festival with director Shonali Bose’s sensitive exploration of disability and sexuality, following a young Indian woman’s path to self-empowerment and sexual liberation,” Goenka says.

Rounding out SUHRFF are the following events on Saturday, Sept. 26:

Screenings: “Stories of Our Lives” and “BlindSight”
1 p.m.
Shemin Auditorium

Directed by Jim Chuchu, “Stories of Our Lives” is a series of vignettes about Kenya’s LGBTQ community. The 2014 anthology film—presented in Swahili and English, with English subtitles—has been described by one critic as a “labor of love and a bold act of militancy.” It is followed by “BlindSight,” Bob Sacha’s acclaimed 2014 short about the visual imagination of blind and visually impaired photographers.

This 2015 documentary, co-directed by Brad Allgood and Graham Townsley, follows the Recycled Orchestra of Cateura in Paraguay, whose young members make their own instruments out of trash from a nearby landfill, one of the largest in South America. The film is presented in Spanish with English subtitles. Afterward, Allgood will participate in a Skype interview.

There are several free parking options for the Shemin Auditorium events. On Friday, they include the Q4 Parking Lot on College Place, as well as any of the “open lots” around campus. On Saturday, free public parking is available only in Booth Garage on Comstock Avenue, between Marshall Street and Waverly Avenue.

Additional support comes from the David B. Falk College of Sport & Human Dynamics; the departments of Anthropology, Geography, Political Science, and Sociology, all in the Maxwell School; the departments of Art & Music Histories and Women’s & Gender Studies, as well as the LGBT Studies Program, all in A&S; the Department of Communication & Rhetorical Studies in the College of Visual and Performing Arts; the Disability Studies Program in the School of Education; the Disability Cultural Center; Students Advocating Safe Sex and Empowerment; and the Department of Environmental Resources Engineering in the State University of New York’s College of Environmental Science and Forestry.