SU Drama’s 2015/16 season features six productions, including three musicals, starting in October with the Cole Porter classic “Kiss Me, Kate.” Second in the season is “Agamemnon,” the haunting Greek classic, followed by a co-production with Syracuse Stage, “Peter Pan.” After winter break, the season continues with “Punk Rock” and the country-flavored musical “The Spitfire Grill.” Closing the season in May is the comedy “A Flea in Her Ear.” 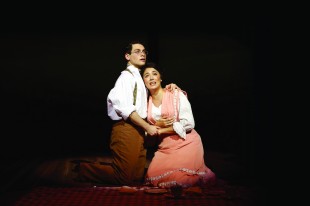 The joys, madness and rewards of working in the theater, onstage and off, are celebrated in this heralded musical that can be rightly called a Broadway treasure. Taking its inspiration from Shakespeare, “Kiss Me, Kate” follows the antics of two feuding romantic couples during a touring production of “The Taming of the Shrew.” Sparkling with 18 classic Cole Porter songs—including “Another Op’nin’, Another Show,” “Wunderbar,” “So in Love,” “Always True to You in My Fashion,” “Too Darn Hot” and “Brush Up Your Shakespeare”—”Kiss Me, Kate” epitomizes the Broadway musical comedy at its irresistible best. A love song to the theater.

Fire in the night signals the return of Agamemnon from 10 long years of war in Troy. Triumphant and with a captive slave, the prophetess Cassandra in tow, the warrior king arrives home and is welcomed by Clytemnestra, wife and mother, who seethes with a vengeance born of the slaughter of their daughter Iphigenia. Revenge begets revenge; fate will be fulfilled. The first great play of Aeschylus’ Oresteia trilogy, “Agamemnon” delivers a visceral and haunting theatrical experience.

Journey to Neverland in the high-flying family musical “Peter Pan.” “All children grow up, except one.” So begins the magical adventure that has been delighting youngsters (and oldsters) for more than 100 years. With such songs as “I’m Flying,” “I Won’t Grow Up,” and “Never Never Land,” “Peter Pan” delivers a musical and adventurous treat for the holiday season. Paul Barnes (Irving Berlin’s “White Christmas,” “The Miracle Worker”) directs with choreography by Anthony Salatino.

Propelled by an anxious momentum, “Punk Rock” is an honest and unnerving chronicle of contemporary adolescence at the breaking point. In a private school outside of Manchester, England, a group of highly articulate 17-year-olds flirt and posture their way through the day while preparing for their A-Level mock exams. With hormones raging and minimal adult supervision, nothing can forestall the underlying tension that becomes increasingly pronounced as the play moves from comic beginnings to a serious and troubling conclusion. Playwright Simon Stephens’ (“The Curious Incident of the Dog in the Night-Time”) ear for teen conversations, shifting alliances and fundamental fears is spot-on. Gripping, insightful and excitingly theatrical.

“The Spitfire Grill,” a Musical
April 1-10, 2016
Opening Night: April 2
Music and Book by James Valcq
Lyrics and Book by Fred Alley
Based on the film by Lee David Zlotoff
Directed by Ralph Zito
Musical direction by Brian Cimmet
Choreography by Andrea Leigh-Smith

A soul-satisfying, country-flavored work of theatrical imagination, “The Spitfire Grill” glows with an abundance of warmth, spirit and goodwill. A feisty parolee named Percy follows her dreams to a small town in Wisconsin and finds a place for herself working at Hannah’s Spitfire Grill. Aged and troubled, Hannah would like to sell the grill, but there are no takers in the forgotten town of Gilead. A simple idea proposed by Percy brings new life to the grill and renewed hope to the people of the town, including one long gone but not so far away. A graceful and compelling story buoyed by soaring and instantly infectious melodies.