The Bank of America Children’s Tour, “New Kid,” has hit the road to begin a run of performances at schools throughout the Central New York region. Over 9,000 students in 23 schools across a five-county region will see the production through Dec. 10. 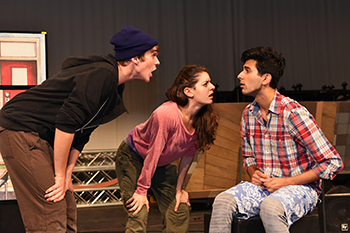 Told from the perspective of Nick, who recently immigrated to America, “New Kid” promotes tolerance and compassion, addressing racism, prejudice, peer pressure and conflict resolution. Nick is struggling with a new language and new way of life. The kids at his new school make fun of him because of his customs and strange language. The twist is that the Americans speak a kind of gibberish which neither Nick nor the audience understand.

Performed in striking visual terms, “New Kid” offers an extraordinary opportunity to share a rich theatrical experience with students. “’New Kid’ is an uncomplicated, dutifully heartwarming play that chronicles Nick’s eventual mastery of a new language, his triumph over schoolyard bullies and his acquisition of a friend, Mench, who learns to be culturally sensitive,” said the Washington Post.

Each fall, the Bank of America Children’s Tour brings high-energy, interactive and culturally diverse performances to elementary school audiences. Productions are designed to be offered in any theater, cafeteria, classroom or open space, with fully staged scenery, costumes and sound. Performances include a talkback with the actors, and pre- or post-show sessions with teaching artists can be arranged upon request.

A public performance of “New Kid” will take place on Saturday, Nov. 7, at 11 a.m. in the Archbold Theatre at the Syracuse Stage/Drama Complex, 820 E. Genesee St. This event will be free and open to the public.