Marc Lamont Hill, Distinguished Professor of African American Studies at Morehouse College and a leading journalistic voice in social justice, will be the keynote speaker for the 31st annual Martin Luther King Jr. Celebration at the University on Jan. 31, 2016. The yearly MLK Celebration at the Carrier Dome is the largest University-sponsored event in the United States to honor King’s legacy. 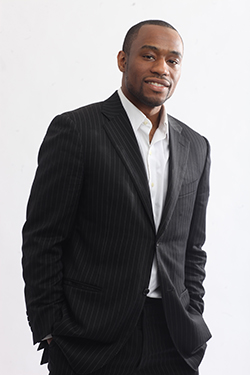 Hill serves as host of HuffPost Live and BET News, as well as a political contributor for CNN. He is the former host of the nationally syndicated television show “Our World” on Black Enterprise and political contributor to Fox News Channel. An award-winning journalist, Hill has received numerous awards from the National Association of Black Journalists, GLAAD and the International Academy of Digital Arts and Sciences.

Hill is a founding board member of My5th, a non-profit organization devoted to educating youth about their legal rights and responsibilities. He is also a board member and organizer of the Philadelphia Student Union. He works closely with the ACLU Drug Reform Project, focusing on drug informant policy. Over the past few years, Hill has actively worked on campaigns to end the death penalty and to release numerous political prisoners. In 2011, Ebony Magazine named him one of America’s 100 most influential black leaders.

MLK Celebration Chair Catherine Kellman called Hill one of the leading voices of activism of this generation. “He was chosen by the committee because of his ability to connect with our students,” says Kellman. “He challenges young people worldwide to become involved in their own way, to truly think globally and act locally. The theme of this year’s event is remember, celebrate and act: activism and agency for the future. The focus is on activism as a nation our students have created or participated in movements to create change in. We hope our students will use Hill’s message as they embark on their own journey to remember, to celebrate and to act.”

The MLK Celebration not only includes the event at the Carrier Dome. It’s a weekend filled with activities and community-wide involvement organized by the City of Syracuse, the University and the MLK committee. On Saturday, Jan. 30, there will be the community event which is a day of educational workshops and recreational activities, as well as an awards ceremony for K-12 students.

On Sunday, Jan. 31, dinner precedes the program at 4:30 p.m., with doors opening at 4 p.m. Tickets for employees, staff and the general public will be sold through the Schine Box Office, and are available on an individual basis ($30) or in blocks of 10 ($300). Cash, credit or interdepartmental ID may be used. New this year: all tickets are for general seating.

Student tickets are $15 and can be purchased through a meal plan at dining halls. Students without a meal plan can purchase at Schine Box Office as well.

The evening program, which includes an address by Hill, the presentation of the 2016 Unsung Hero Awards, music by a community choir and entertainment by student performers, begins at 5:30 p.m. and is free and open to the public. For questions, call Hendricks Chapel at 315-443-5044.

American Sign Language (ASL) interpretation and Communication Access Real-Time will be available at the event. To request dietary or other accommodations, contact Ginny Yerdon at Hendricks Chapel at 315-443-2901 or gyerdon@syr.edu.