Jerry Evensky G’84, professor of economics and a Meredith Professor for Teaching Excellence in the College of Arts and Sciences and the Maxwell School, is the author of the new book “The Wealth of Nations: A Reader’s Guide” (Cambridge University Press, 2015), which examines and analyzes famed moral philosopher Adam Smith’s economic principles. 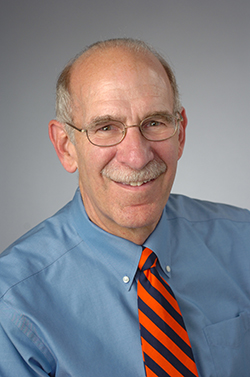 Smith was an 18th-century Scottish philosopher, as well as the author of “The Wealth of Nations,” considered the first book to fully analyze a free market economy.

“What people need to remember is that Adam Smith was not an economist; he was a moral philosopher,” says Evensky. “This book walks the reader through “The Wealth of Nations,” explaining the elements and flow of Smith’s economic analysis, highlighting how that analysis was integrated into his larger moral philosophical vision.”

“Adam Smith believed that the best context for exploring the nexus of these dimensions of the human condition was rich, textured historical analysis,” says Evensky, whose expertise extends into ethics and liberal society, as well as economic education. “The lesson he took from history was that a liberal, free market society will only be as successful as the ethical standards of that society are just and broadly shared. Justice is the foundation of a community of trust, and trust is key to constructive free human intercourse.”

Evensky says that if there is a hero in Smith’s analysis, it is not the capitalist, but the “ethical citizen.”

Already, Evensky’s book has drawn praise from critics and colleagues alike. Sam Fleischacker, professor of philosophy at the University of Illinois at Chicago, calls “A Reader’s Guide” a “straightforward and lively commentary” that introduces people to many central themes of Adam Smith’s great book.

Ryan Patrick Hanley, associate professor of political science at Marquette University, considers it an “indispensable guide” to a foundational text in modern economics and the liberal tradition, offering an “engaging, accessible and systematic review” of Smith’s book.

Evensky is gratified by the positive reception: “It is incredibly rewarding to hold a book you’ve completed in your hands, and to know that it will be in libraries around the world for others to consider for years to come.”