William Deresiewicz, a New York Times best-selling author, award-winning essayist and critic, and frequent college lecturer, will deliver this fall’s Milton First-Year Lecture in the College of Arts and Sciences. 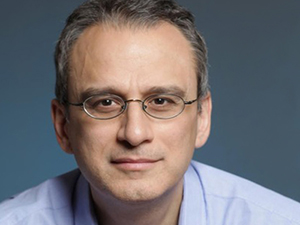 Titled “The Value of a Liberal Arts Education,” Deresiewicz’s presentation will take place Monday, Sept. 21, at 7:30 p.m. (doors open at 7 p.m.) in Schine Student Center’s Goldstein Auditorium. He is expected to draw heavily from his acclaimed book “Excellent Sheep: The Miseducation of the American Elite and the Way to a Meaningful Life” (Free Press, 2014).

The Milton Lecture is part of the college’s First-Year Experience, and is open only to first-year and transfer students in Arts and Sciences, as well as their First-Year Forum leaders. For more information, call the Office for Curriculum, Instruction and Programs at 315-443-1414.

The lecture is funded by the Laura Hanhausen Milton Freshman Lecture Endowment.

Deresiewicz says that, while teaching English at Yale University, he found that many of his students—“some of the nation’s brightest minds,” in his words—had difficulty thinking critically and creatively and finding a sense of purpose.

“As schools shift focus from the liberal arts to ‘practical’ subjects, students are losing the ability to think in innovative ways,” he says. “College should be a time for self-discovery, when students can establish their own values and measures of success, so they can forge their own path.”

Gerald R. Greenberg, the college’s senior associate dean, says that, given mounting interest in the value of a liberal arts degree, Deresiewicz’s visit is timely and relevant.

“A liberal arts degree, particularly from Syracuse University, can position students for a lifetime of professional and personal success,” says Greenberg, adding that Deresiewicz is a proponent of “intellectual cross-training.” “William Deresiewicz is a powerful steward of the liberal arts, and I know our students will walk away from his lecture with a greater understanding of how to apply a liberal education to their lives.”

Deresiewicz’s work has appeared in The New York Times, The Atlantic, Harper’s, The New Republic, Slate, Bookforum, The Chronicle of Higher Education, The New Yorker and The London Review of Books. He also is a contributing writer to The Nation and a contributing editor to The American Scholar. His other books are “A Jane Austen Education: How Six Novels Taught Me About Love, Friendship, and the Things That Really Matter” (Penguin Books, 2011) and “Jane Austen and the Romantic Poets” (Columbia University Press, 2004).

As a professor, Deresiewicz has taught courses in modern British fiction, the “Great Books,” Indian fiction and writing. Deresiewicz earned a Ph.D. from Columbia, where he also received three master’s degrees, including one in journalism.

The Milton First-Year Lecture is named for Laura Hanhausen Milton ’51, a member of the College’s Board of Visitors who, along with her late husband, Jack ’51, has been a long-time supporter of the University. The lecture is part of a series of programs designed to facilitate students’ transition to college life. Past speakers have included such luminaries as Neil Shubin, Jane Goodall, Henry Louis Gates and Doris Kearns Goodwin.