College of Visual and Performing Arts (VPA) Dean Ann Clarke today announced that she will be stepping down as dean at the conclusion of the 2015-16 academic year. Clarke, who has served as VPA’s dean since 2008, will take a one-year research leave and return to the faculty in fall 2017. 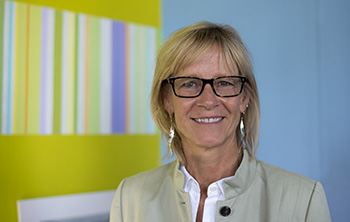 During her tenure as dean, Clarke oversaw the creation of key associate dean positions in assessment and accreditation, research and graduate studies and global academic programs and initiatives. Coupled with the establishment of strong academic leadership in the college’s six schools and departments—including endowed chairs in the School of Art and School of Design—and the efforts of staff and faculty, the college has flourished as a leader in the education of students in art, communication and rhetorical studies, design, drama, music and transmedia.

“Under Ann’s leadership, the College of Visual and Performing Arts has gained an international reputation for its programs and faculty, opportunities for students both on and off campus and creative and scholarly research,” says Interim Vice Chancellor and Provost Liz Liddy. “We are thankful that Ann will return to the VPA faculty, where she can continue to dedicate herself to the success and well-being of our students.”

“It has truly been an honor and privilege to lead the faculty and staff of this college in the name of providing the absolute best education that our students deserve at a remarkable research institution,” says Clarke. “We as a whole and individually educate cultural leaders by being cultural leaders through our studios, presentations, writings, performances, activism and extremely hard work.”

Since 2008, numerous VPA schools, departments and programs have achieved national rankings, contributing to an increase in the recruitment of top faculty and students. These include graduate programs in ceramics, printmaking, sculpture and transmedia (U.S. News and World Report’s “Top 20 Best Graduate Schools in Fine Arts”); programs in environmental and interior design and industrial and interaction design (DesignIntelligence’s “America’s Best Architecture and Design Schools”); the film program (the Hollywood Reporter’s “Top 25 American Film Schools”); the Department of Drama (the Hollywood Reporter’s “Top 25 Drama Schools”); and the Bandier Program and Rose, Jules R. and Stanford S. Setnor School of Music (the Hollywood Reporter’s “Top 25 Music Schools”). In addition, the graduate program in communication and rhetorical studies has risen to become one of the top master’s programs in the country.

Through ongoing teamwork by administration and faculty, the college has made significant progress on assessment of student learning and the creation of a framework for ongoing preparation and facilitation of accreditation and external self-study reviews. It has also increased its support for and promotion of faculty and graduate student research. In addition, a more strategic and formalized focus on the college’s global presence has led to new or expanded academic offerings and/or immersion programs in New York City; Los Angeles; Washington, D.C.; Brazil; the Czech Republic; England; France; Germany; and Italy. The college has also signed memorandums of understanding for partnerships with Rose Bruford College in London, York St. John University in England, the University of Copenhagen in Denmark and Massey University in New Zealand.

Clarke and the college have also overseen numerous initiatives for and renovations to VPA-inhabited buildings and facilities, including:

Liddy, working with Chancellor Kent Syverud, will be creating a timetable for the search process for the next VPA dean.