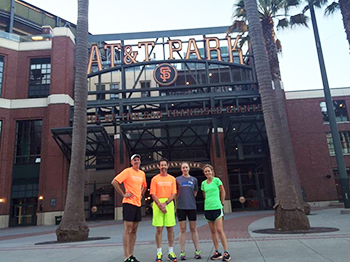 Four members of the University community are among the top runners from around the world taking part in the JP Morgan Corporate Challenge Championship in San Francisco this week.

Neal Coffey, Joe Roth, Miranda Blechman and Tiffany Kirkland represent the University. Coffey and Blechman were on the original team, and Roth and Kirkland were called on to serve as alternates for the race in San Francisco. Coffey and Blechman were on the 2014 team from Syracuse University, and were among the top finishers from the race held along the Onondaga Lake Parkway last year. This is the 32nd year the championship has been held, and it includes teams from 13 cities in seven countries.