Jeffrey Gonda, assistant professor of history at the Maxwell School, was honored by the Supreme Court Historical Society with the Hughes-Gossett Award for Best Journal Article.

Gonda was presented the award by Supreme Court Justice Antonin Scalia during a ceremony earlier this summer. 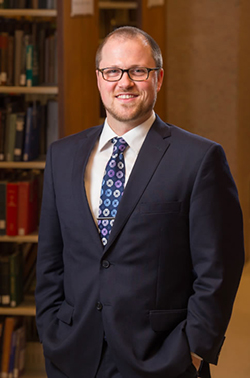 The award was for Gonda’s paper “Litigating Racial Justice at the Grassroots: The Shelley Family, Black Realtors and Shelley v. Kraemer (1948).” His article tells the story of J.D. and Ethel Lee Shelley, an African-American couple who bought a house in 1945 in St. Louis. However, unknown to them, the home was under a racial restrictive covenant that prohibited African Americans and other minorities from occupying the property.

Another local homeowner quickly sued the Shelleys to prevent the family from keeping the home, but in 1948, the Supreme Court ruled in favor of the Shelley family and rendered all racially restrictive covenants unenforceable on the grounds that they violated the 14th Amendment of the U.S. Constitution. Gonda’s paper details the background of the Shelley family, the role of local black realtors in their fight for equality and the unique aspects of this landmark case.

“Receiving the award was a tremendous honor,” says Gonda. “Getting to do so in the same courtroom that the Shelley family fought the last stages of their battle against housing segregation made it even more poignant. It’s a wonderful recognition of the Shelleys, their advocates and the story of this case that is so often forgotten as a milestone in the Civil Rights Movement.”

Gonda has written extensively about the subject and is the author of “Unjust Deeds: The Restrictive Covenant Cases and the Making of the Civil Rights Movement.”