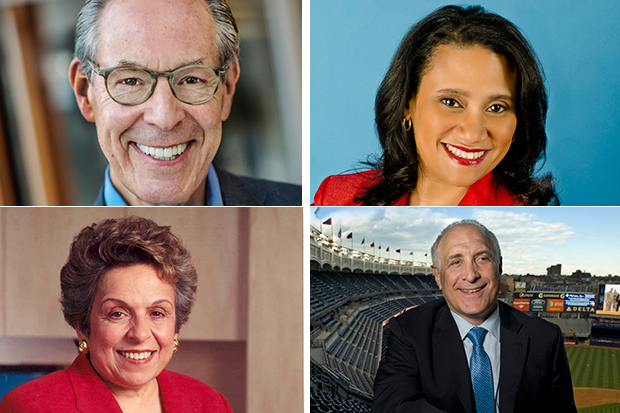 Four outstanding Syracuse University alumni from the worlds of media and education, sports marketing, advertising and public relations, and public service will be honored this year during the annual Arents Award Ceremony as part of Orange Central.

Orange Central is Oct. 19-25 and features lectures, tours of campus, arts events, alumni get-togethers and the football team’s match up against the Pittsburgh Panthers. A complete schedule for the week can be found at the Orange Central website.

The Arents Award is the University’s highest alumni honor. It is named for George Arents, a successful manufacturer who served on the University Board of Trustees from 1930 until his death in 1960.

President and CEO of the Clinton Foundation and on leave as the Trustee Professor of Political Science and Health Policy at the University of Miami, Shalala has more than 40 years of experience as an accomplished scholar, teacher and administrator.

Born in Cleveland, she received her B.A. degree in history from Western College for Women and, as one of the country’s first Peace Corps volunteers, served in Iran from 1962-64. She then earned her master’s and doctoral degrees at SU’s Maxwell School.

Shalala served as president of the University of Miami from 2001-15, during which time UM solidified its position among top U.S. research universities and its two successful Momentum campaigns raised $3 billion in private support for the university’s endowment, academic and research programs and facilities.

In 1993, President Bill Clinton appointed Shalala to his cabinet as secretary of Health and Human Services (HHS). She held the position for eight years, becoming the longest-serving HHS secretary in U.S. history. At the end of her tenure, a Washington Post article described her as “one of the most successful government managers of modern times.” In 2008, the Council on Excellence in Government named Shalala one of the greatest public servants of the past 25 years.

Her cabinet posting was neither her first nor last role in the federal government. From 1977-80, Shalala served in the Carter administration as assistant secretary for policy development and research at the U.S. Department of Housing and Urban Development. In 2007, President George W. Bush handpicked her to co-chair, with Sen. Bob Dole, the Commission on Care for Returning Wounded Warriors, to evaluate how wounded service members transition from active duty to civilian society. In 2009, she was appointed chair of the Committee on the Future of Nursing at the Institute of Medicine of the National Academy of Sciences. Most recently, she was a member of the Council on Foreign Relations Independent Task Force on the Emerging Global Health Crisis; she was elected to the Council on Foreign Relations in 1982.

Shalala has more than four dozen honorary degrees and a host of other honors, including the 1992 National Public Service Award and the 1994 Glamour Magazine Woman of the Year Award. In 1992, Business Week named her one of the top five managers in higher education. In 2005, U.S. News & World Report named her one of “America’s Best Leaders.” In 2008, President Bush presented her with the Presidential Medal of Freedom, the nation’s highest civilian award, and, in 2010, she received the Nelson Mandela Award for Health and Human Rights, which recognizes individuals for outstanding dedication to improving the health and life chances of disadvantaged populations in South Africa and internationally.

Branch-Ridley is a two-time, Emmy Award-winning transmedia executive. Throughout her 20-plus years in the industry, Erica has worked in both television and digital media for leading network, cable and public broadcasting entities.

Currently, she holds the role of vice president of creative development and executive producer of the Early Learning Collaborative, a division of the Hispanic Information and Telecommunications Network (HITN)—the only Hispanic public broadcasting company in the country—where she oversees the creation of digital games and print classroom materials to support Spanish-speaking pre-K children, parents and teachers in early language development through math and literacy. The program is in more than 100 pilot Head Start schools and home-based daycares across the United States and Puerto Rico. She was also recently charged to build a new arm of the company called HITN Kids and Family.

Previously, Branch-Ridley was VP of a startup venture at Sesame Workshop called “Sesame Learning,” as part of a team that developed a program involving emerging technologies in the delivery of “Sesame Street” content in pre-school teaching. Prior to Sesame Workshop, Branch-Ridley served as executive producer and senior director of TV Land Digital, where she oversaw the creative direction and production for the TV Land and Nick-at-Nite websites. She won numerous awards for her work at TV Land, including a Primetime Emmy Award for Outstanding Achievement in Interactive Television, and was twice nominated for a NATAS Technology Emmy Award in the same category.

Before her position with TV Land, Branch-Ridley was the senior producer for Nickelodeon Online, where she oversaw production and coordinated TV, web development, design and technology to extend the Nick Jr. brand and franchises online. Prior to that, she spent almost 10 years in television with such companies as Black Entertainment Television and worked at CBS News on the award-winning series “48 Hours,” where she started out as the production assistant to Dan Rather and future CBS News president Andrew Heyward and quickly rose through the ranks.

An active panelist, speaker and proponent of diversity in media and transmedia education, Branch-Ridley has delivered numerous guest lectures on children and technology at various universities. She serves on the Newhouse School’s alumni board of directors and is involved with the newly formed Diversity in Apps initiative and the New Media Council of the Producer’s Guild of America.

Branch-Ridley was honored by Multichannel News and Broadcasting & Cable magazines with a Multiethnic TV Executive Leadership Award for her noteworthy role in reflecting onscreen diversity in digital media. She was also chosen by the National Association of Multi-Ethnicity in Communications to participate in its prestigious Executive Leadership Development Program at UCLA.

She holds a B.S. degree from the University with concentrations in speech communications and television production. Branch-Ridley resides in West Orange, N.J., with her husband, Jon Ridley, 17-year-old daughter Nya and 12-year-old twins Olivia and Jonathan.

Mower was born and raised in New York City and attended public schools. He arrived in Syracuse as a freshman in September 1962. SU was the only University to have accepted him. In 1989 he became an University trustee.

For the University, Mower served 16 years as a voting trustee and in 2005 became a life trustee. He served as vice chair of the SU Board, a member of the executive committee, and chair of the Board’s Academic Affairs Committee and the Facilities Committee. He is a long-time member of the S.I. Newhouse School of Public Communications Advisory Council and is a past member of the Martin J. Whitman School of Management Corporate Advisory Council.   The Newhouse School honored Mower by designating its annual advertising guest speaker series as the Eric Mower Advertising Forum.

He and his wife, University Trustee Judith Cotey Mower, are the parents of daughter, Hillary Mower. Eric and Judy were honored previously with the University’s Orange Circle Award for their civic endeavors.

As a poor kid in Brooklyn, Steiner lived for the days when he could scrounge enough change to make the subway trip to Yankee Stadium, buy the cheapest ticket, and bask in the aura of his favorite baseball team. Little could he have known then that one day his name would be linked with the team in an exclusive memorabilia partnership and that he’d own that very stadium.

After graduating from the University in 1981 with an accounting degree, Steiner continually reinvented himself as he capitalized on his two sharpest skills: managing people and providing services.

He started out in hospitality in Baltimore, managing high-end hotel restaurants, then returned to New York, where he managed the Hard Rock Café—then one of the city’s most popular restaurants. During his time there and at the Sporting Club, New York City’s first full-service sports bar, Steiner met many athletes. As he got to know them, he learned that most had no one to represent them for speaking engagements and corporate appearances. He recognized an opportunity. In 1987, he established Steiner Associates (later, Steiner Sports).

By the late 1990s, the firm had dozens of employees, represented most of the big-name athletes in New York, and expanded its business focus to collectibles. Steiner’s unprecedented partnership with the New York Yankees, announced in 2004, provided a way to offer fans authentic Yankees memorabilia and one-of-a-kind fantasy experiences at Yankee Stadium.

Steiner Sports developed similar partnerships with Notre Dame Football, Syracuse Athletics and Madison Square Garden to bring fans closer to the games and athletes through meet-and-greets, speaking appearances, signed memorabilia and countless other products and services. In 2008, Steiner Sports created yet another market by buying exclusive rights to the disassembled Old Yankee Stadium, giving fans the once-in-a-lifetime opportunity to take home seats, signs, bricks from Monument Park and hundreds of other unique pieces.

Today, Steiner Sports is the largest company of its kind in America, generating $40 million in annual revenue and employing 100 people.

Revered as a sports marketing guru, Steiner is a regular on ESPN NY Radio 98.7 FM and is host of the Emmy-nominated “The Hook-Up with Brandon Steiner” on YES Network. He has appeared frequently on CNBC, CNN, MSNBC, ESPN and in newspapers, and is the author of “The Business Playbook: Leadership Lessons from the World of Sports” (Entrepreneur Press, 2003) and “You Gotta Have Balls: How a Kid from Brooklyn Started from Scratch, Bought Yankee Stadium, and Created a Sports Empire” (Wiley, 2012).