Stephen Kuusisto, an acclaimed poet, essayist and memoirist, as well as a University professor, will kick off the Fall 2015 Raymond Carver Reading Series in the College of Arts and Sciences. 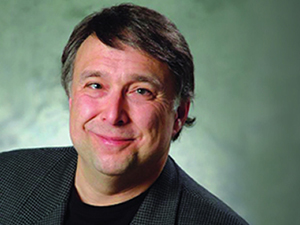 On Wednesday, Sept. 16, Kuusisto will participate in an audience Q&A session at 3:45 p.m., followed by an author reading at 5:30 p.m. Both events are free and open to the public, and take place in Gifford Auditorium. For more information, contact Sarah Harwell G’05, associate director of the M.F.A. Program in Creative Writing, at scharwel@syr.edu.

“Stephen Kuusisto is many things to many people—a professor, an administrator, a social advocate, but we are particularly excited to highlight his accomplishments as a distinguished poet,” Harwell says. “Like much of his work, Stephen’s poetry draws on themes of travel, place, religion, music and loneliness, exploring the relationship between sight, blindness and being.”

Blind since birth, Kuusisto holds multiple appointments at the University, including director of the Renée Crown University Honors Program and professor of disability studies in the Center on Human Policy, Law and Disability Studies in the School of Education. He is the author of two best-selling memoirs, “Eavesdropping: A Memoir of Blindness and Listening” (W.W. Norton & Co., 2006) and “Planet of the Blind” (Delta, 1998), a New York Times “Notable Book of the Year”; and two poetry collections from Copper Canyon Press, “Letters to Borges” (2013) and “Only Bread, Only Light” (2000).

Kuusisto’s essays and poems have appeared in numerous anthologies and literary magazines, including The New York Times Magazine, Harpers’ Magazine, The Washington Post Magazine, and Partisan Review. His writing has drawn praise from The New York Times (“a powerful writer with a musical ear for language and a gift for emotional candor”) and USA Today (“a talented writer judged by any standard”).

“If we account for Kuusisto’s restricted sight, the brilliance of his verse acquires deeper resonance, for his work imagines a realm between sight and sound composed of the sensory stimuli we all know and recognize, but split, fractured and juxtaposed to inhabit the mind’s ear of his readers,” writes Diego Báez, an instructor in the M.F.A. program in creative writing at Truman College.

Also a disability advocate, Kuusisto is an authority on a number of topics, including diversity, education and public policy. He has been invited to speak on television and radio programs all over the world, including “The Oprah Winfrey Show,” NBC’s “Dateline,” NPR’s “Talk of the Nation” and “Voice of America.”

Kuusisto is a graduate of the University of Iowa’s Writer’s Workshop.