The University’s Army ROTC program hosted a Change of Authority ceremony Friday, Sept. 4, for the position of professor of military science. 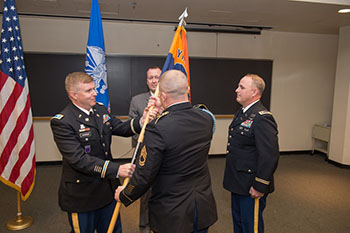 The new leader of the Army ROTC program, Lt. Col. Jason Warner, at left, receives a flag during the Change of Authority ceremony Friday, as J. Michael Haynie, vice chancellor for veterans and military affairs, center, and retiring Lt. Col. Michael Bianchi, at right, look on.

Syracuse University Vice Chancellor for Veteran and Military Affairs Michael Haynie acted as the higher authority in the ceremony, and facilitated the exchange of leadership. Haynie also issued a Certificate of Appreciation to Bianchi on behalf of the president of the United States. Along with the presentation of the change of authority, Bianchi was also awarded the Meritorious Service Medal for exceptional meritorious service while serving as the professor of military science. The event concluded with a retirement ceremony for Bianchi, followed by the playing of the Army Song. A brief reception followed for the cadets and leadership of the Army ROTC.