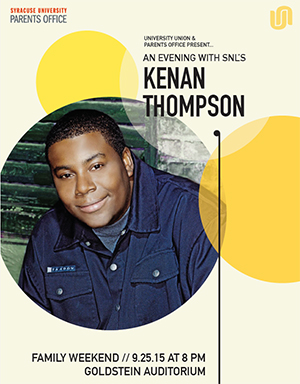 University Union and the Syracuse University Parents Office will host “Saturday Night Live” cast member and actor Kenan Thompson in Goldstein Auditorium on Sept. 25 at 8 p.m. “An Evening with Kenan Thompson” will be a part of this year’s Family Weekend programming.

A native of Atlanta, Thompson made his television debut as a member of Nickelodeon’s all-kid sketch comedy series “All That.” He and costar Kel Mitchell debuted in a spin-off show “Kenan and Kel” in 1996. Thompson is now best known for his tenure on “Saturday Night Live,” recently wrapping his 12th season.

During his time on SNL, Thompson has made numerous contributions to the show with his catalog of impressions that include Bill Cosby, the Rev. Al Sharpton, Charles Barkley, Cee Lo Green and Whoopi Goldberg, and by playing memorable characters such as “DJ Dynasty Handbag,” the scathingly fierce co-host of “Deep House Dish,” boisterous second wife “Virginiaca Hastings,” and Weekend Update correspondent “Jean K. Jean.” Thompson has garnered praise from audiences for playing characters “Lorenzo McIntosh,” a convict who uses “scare tactics” with delinquents, and “D’Andre Cole,” the disruptive singing talk show host on the wildly popular sketch “What Up With That?”

Thompson can most recently be heard as the character Impresario in the Hulu original animated series “The Awesomes,” created by fellow “SNL” cast member Seth Meyers.

The Parents Office would like to remind families to be prepared with their special event code from their Family Weekend Registration receipt and parking pass when ordering tickets.

No backpacks will be allowed for this event.