On Aug. 25, James B. Steinberg, dean of the Maxwell School of Citizenship and Public Affairs, provided the keynote address for the 2015 Republic of China (Taiwan)-US-Japan Trilateral Security Dialogue in Taipei. Steinberg spoke on shared trilateral security interests in East Asia. 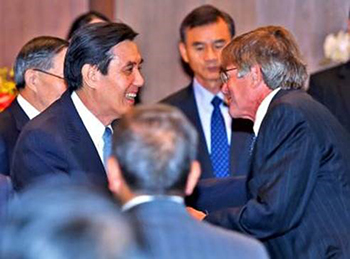 The dialogue included lawmakers from the United States and from Taiwan. Also on hand were international experts and scholars from Japan, Australia, India, Indonesia, South Korea, New Zealand, Singapore, Vietnam, the Philippines and the United States. They discussed security and economic issues.

The event was co-organized by Taiwan’s Ministry of Foreign Affairs, the Chinese Council of Advanced Policy Studies in Taipei, the Heritage Foundation and the Japan Institute of International Affairs.

During his time in Taiwan, Steinberg met with President Ma Ying-Jeou, other Taiwanese government officials and with representatives from the two country’s major political parties.  He exchanged views with them on a variety of issues related to U.S.-Taiwan relations.

Steinberg’s visit and meeting with the president were publicized on the website of Taiwan’s Office of the President.