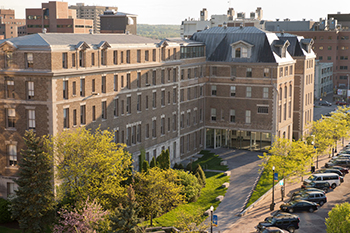 Huntington Hall, home of the School of Education

Gill has been named assistant professor of disability studies in the department of Cultural Foundations of Education. He began his academic career in 2010 at the University of Connecticut as an assistant professor in the women’s gender, and sexuality studies program. He also taught in the Department of Gender and Women’s Studies at the University of Wisconsin-Madison, and held an appointment in gender, women’s and sexuality studies at Grinnell College prior to his move to Syracuse. Gill is the author of the book “Already Doing It: Intellectual Disability and Sexual Agency” and has another book in progress. He has written an extensive number of journal articles, book chapters and edited collections, and presented at numerous conferences, most recently at the annual meeting of the Society for Disability Studies. Gill has a certificate in gender and women’s studies and disability ethics; was awarded the Dorothy Haecker Postdoctoral Teaching Fellowship from the University of Missouri; the Van Doren Scholarship and the Gender and Women’s Studies Graduate Student Award, both from the University of Chicago.

Kim has been named assistant professor in the women’s and gender studies program in the College of Arts and Sciences and also holds a partial appointment in the Department of Cultural Foundations of Education in the School of Education. She started her professional career in 2007 as a postdoctoral fellow at the University of Michigan at Ann Arbor and has been an assistant professor in the Department of Gender and Women’s Studies at the University of Wisconsin-Madison for the last five years. Kim’s publications are global. She has two books and numerous articles written in Korean and her book (published in English), “Curative Violent: Rehabilitating Disability, Gender, and Sexuality in Modern Korea,” is currently under contract with Duke University Press. Kim has also reviewed several articles, book chapters and encyclopedia entries. Kim has received multiple research grants, fellowships and awards, including one from the American Association of University women and the International Student Service Award.

Knapp has been named assistant professor in the music education program, jointly served in the School of Education and the College of Visual and Performing Arts. He started his teaching career over 10 years ago as director of a high school steel band program, and has since focused his instruction on such pedagogies as world music, guitar and steel band. Knapp is a professional steel band performer and has used his unique skill to connect and work with homeless individuals and children with autism. Prior to coming to Syracuse University, Knapp was an assistant professor of music education at the Emirates College for Advanced Education in Abu Dhabi. Knapp’s book, “Introduction to Steel Band,” was published in 2009. In addition, he has written numerous articles and conducted several presentations focused on the effect of music in special education and on homeless individuals. Knapp’s most current service to the profession includes work with the Autism Project, and Goals UAE, a nonprofit center in the United Arab Emirates that develops programs for musically underserved Emirati children with autism.

Tunur has been awarded a postdoctoral teaching position in the Department of Exercise Science. She has a fascinating record as an instructor and researcher. Tunur has taught numerous courses in biology, neuroscience and kinesiology and is also an accomplished dancer, using her skills to teach the young, the elderly and people with Parkinson’s disease. Most recently, Tunur taught a course at Syracuse University titled “Dance, Exercise, and Brain Function,” which brought the disciplines of dance and neuroscience together. Tunur has published several articles and has numerous manuscripts in preparation. As a researcher, her experience started in 2003 as an undergraduate research assistant in Turkey. Since then, she has held postdoctoral associate positions in neuroscience at the University of Illinois at Urbana-Champaign and Syracuse University. Tunur is a member of the society for neuroscience, the society for behavioral neuroendocrinology and Dance for Parkinson’s disease (an organization dedicated to connecting dancers with Parkinson’s patients).

White has been named assistant professor of inclusive education in the teaching and leadership department. She started her professional career as an educator nearly 20 years ago. White is not a newcomer to Syracuse. In 2001, she held positions as research assistant, teaching assistant and field supervisor in the teaching and leadership department, held a research assistant position at the Center on Human Policy and was a staff associate at the Institute on Communication and Inclusion. Prior to her to return to Syracuse University, White was as an assistant professor at the University of Rochester. White has two books published, and has collaborated on numerous journal articles, chapter books and other publications. She has also participated in and presented papers for nearly 60 conferences nationally and internationally. Additionally, White holds impressive and distinguished service to the profession. She was an expert witness for a legal case on the misdiagnosis of Romani children and was also a member of the European Academic Network on Romani studies, acting as a proceedings monitor and reporter at the third United National Ad Hoc committee on the Human Rights of People with disabilities, and she is an active member of numerous professional organizations.