A paper co-authored by Martin J. Whitman School of Management’s Johan Wiklund, professor of entrepreneurship, and Professor Tom Lumpkin, the Chris J. Witting Chair in Entrepreneurship, was selected to receive the 2015 Greif Research Impact Award. The two professors were honored during the recent business meeting of the entrepreneurship division at the Academy of Management meeting in Vancouver. 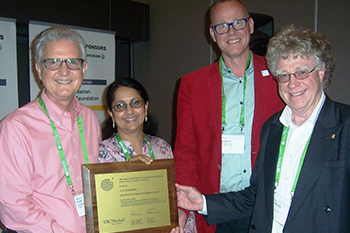 Professor Tom Lumpkin, left, and Johan Wiklund, second from right, accept the Greif award. Pictured with them are Nandini Rajagopalan, second from left, of the Greif Center for Entrepreneurial Studies at USC and Michael Frese, the paper’s third co-author.

Given annually by the Greif Center for Entrepreneurial Studies at the University of Southern California, the award recognizes an entrepreneurship paper that appeared in the top-tier management and entrepreneurship journals six years ago and received the highest citations (based on the Social Sciences Citations Index) in the five years following publication.

Wiklund and Lumpkin’s study of the impact of entrepreneurial orientation on firm performance has been cited almost 800 times in the five years since its publication and has opened up to a large number of other streams of research on the topic.

“The fact that this award is based on peer citations makes this award so much more impressive,” says McKelvie. “It objectively shows that other researchers, including doctoral students, are being influenced by that study.”

Wiklund and Lumpkin’s paper, titled “Entrepreneurial orientation and business performance: Assessment of past research and suggestions for the future,” (with Rauch, A. and Frese, M.) was published in 2009 in the Entrepreneurship Theory & Practice Journal.