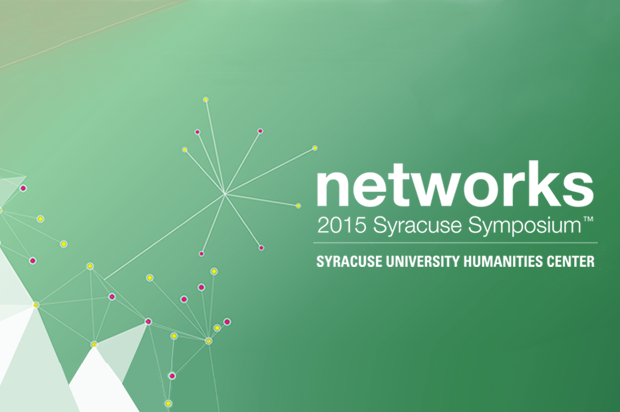 “Networks” is the theme of the 2015 Syracuse Symposium™, organized and presented by the Syracuse University Humanities Center in the College of Arts and Sciences.

The popular fall series begins with a lecture by nationally renowned arts leader Ruby Lerner on Thursday, Sept. 10, at 6:30 p.m. in Watson Theatre in the Robert B. Menschel Media Center. The schedule continues with a variety of thematically related lectures, workshops, screenings, readings and performances. All events are free and open to the public, except for the Society for New Music program on Sunday, Nov. 8. For more information, call 315-443-7192, or visit http://www.syracusehumanities.org.

Vivian May, the Humanities Center’s new director, says this year’s theme responds to the proliferation of digital and social media across local and global contexts. “‘Networks’ encourages us to confront conventional ideas about authorship, power, privacy and collective action,” says May, also an associate professor and former chair of women’s and gender studies. “At the same time, networks are nothing new. We will explore their various meanings, possibilities and histories, as witnessed through the lens of knowledge, power, communication, cultural production and collaboration.” 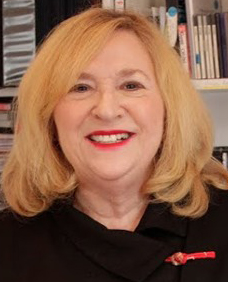 Lerner is founder of Manhattan-based Creative Capital, a nonprofit organization that provides funding, counseling and career development services to creative and performing artists. She previously served as executive director of the Association of Independent Video and Filmmakers (AIVF) and publisher of AIVF’s The Independent. Lerner has also held leadership positions at Alternate ROOTS and the IMAGE Film and Video Center, both in Atlanta, and at the Manhattan Theatre Club in New York.

Sponsors: Light Work; School of Art and Department of Transmedia, both in the College of Visual and Performing Arts

Warren and Shore are co-founders of Six Degrees of Francis Bacon, a collaborative digital project attempting to reconstruct Great Britain’s Early Modern social network (c. 1500s-1700s). Launched in 2012 with support from a Google Faculty Research Award, the open source project enables scholars and students to curate a dataset of more than 13,000 people and nearly 200,000 relationships.

Sponsors: Department of Art & Music Histories and The Writing Program, both in A&S, and Syracuse University Libraries

Contractor holds multiple appointments at Northwestern, including director of the Science of Networks in Communities Research Group. Drawing on his ongoing study of networks, he will discuss how social scientists and social network scholars use big data to monitor, anticipate and design interventions that involve grand societal challenges. His presentation doubles as the annual Kameshwar C. Wali Lecture in the Sciences and Humanities.

Sponsors: Department of Physics and the Humanities Center, both in Arts and Sciences

The Syracuse University Human Rights Film Festival (SUHRFF) marks its 13th year with an exploration of human rights and social justice struggles around the globe. The lineup includes “(T)error,” the first documentary to place filmmakers on the ground during an FBI counterterrorism sting operation; “Overburden,” a documentary about the complex lives of people in West Virginia’s coal country; “Stories of Our Lives,” an anthology film about LGBT experiences in Kenya; “Landfill Harmonic,” a documentary about an impoverished Paraguayan community, where a local youth orchestra plays instruments made from garbage; and “Margarita, With a Straw,” a fictional narrative of self-discovery about a “disabled” young woman from India.

Festival Co-Sponsors: Institute for National Security and Counterterrorism; the International Relations Program and the South Asia Center, both in the Maxwell School; and the LGBT Resource Center

Charles Blow and Ross Douthat, New York Times Op-Ed columnists
“Social Inequality: The How, Why and What to Do”
Tuesday, Oct. 13, 7:30 p.m.
Hendricks Chapel

Part of the University Lectures series, this program by two of today’s leading American journalists explores how characteristics such as age, gender, class and ethnicity impact one’s access to “social” goods, including income, education, healthcare and political representation.

Ethan Zuckerman, director of the Center for Civic Media at the Massachusetts Institute of Technology and a principal research scientist at the MIT Media Lab
Keynote: “Insurrectionist Civics and Digital Activism in an Age of Mistrust”
Thursday, Oct. 15, 7:30 p.m.
Watson Theatre

Zuckerman, a highly regarded media scholar, blogger and Internet activist, is the symposium’s keynote speaker. He is the author of the award-winning book “Digital Cosmopolitans: Why We Think the Internet Connects Us, Why It Doesn’t, and How to Rewire It” (W.W. Norton, 2014).

The role of the print workshop in the career of seminal pop artist James Rosenquist is the subject of a major panel discussion. Participants include Sarah Bancroft, art historian and curator, as well as associate director of the Fluent-Collaborative/testsite in Austin, Texas; Bill Goldston, director of Universal Art Limited Editions; and Donald Saff, emeritus dean and Distinguished Professor of the Arts at the University of South Florida (USF), founder of USF’s Graphicstudio, and artistic director of the Rauschenberg Overseas Culture Interchange. The event is presented in conjunction with the SUArt Galleries exhibition “James Rosenquist: Illustrious Works on Paper, Illuminating Paintings,” running through Nov. 22. 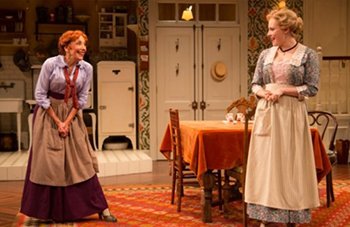 Scene from “The Underpants”

On Sunday, Oct. 25, Syracuse Stage will host a panel discussion at approximately 3:30 p.m. (following the 2 p.m. matinee) titled “Glamour and Damage: Women, Scandal and Social Media Networks.” A group of experts will consider the impact of social networks of communication in the past century on women involved with incidents of so-called “scandal.”

University Lectures continues with a severe indictment of corporate globalization, capitalism and the environment. Klein will draw from her most recent book, “This Changes Everything” (Simon and Schuster, 2014), and her international bestseller, “The Shock Doctrine: The Rise of Disaster Capitalism” (Picador, 2008), which attempts to re-imagine the vast challenge of climate change. The Canadian author is also known for her previous book, “No Logo: Taking Aim at the Brand Bullies” (Picador, 1999).

Presented as part of the Downtown Writers Center’s fall lineup, this event features readings by two eminent poet-activists. Collins, who founded the M.F.A. Program in Creative Writing at the University of Massachusetts Boston, has also taught at Oberlin College and Cornell University. Pratt recently retired from Syracuse, where she held faculty positions in the Writing Program and the Department of Women’s and Gender Studies and helped establish the LGBT Studies Program. The reading will focus on social injustice in their work, and will be followed by a Q&A and book-signing.

The Society for New Music presents its annual fall concert on campus with a program of multi-site sound and visuals. The evening includes original music for computer and acoustic instruments that interacts with broadcasts of live dance from Cornell University and live ink painting, accompanied by erhu (a two-string bowed instrument), from the Central Conservatory of Music in Beijing, China. Participants include composers Neil Rolnick, Ping Jin and Kevin Ernste, as well as visual artist Lorne Covington.

Anjalika Sagar, filmmaker and founder of the Otolith Group
“We Were Never Human: A Film Screening and Conversation with The Otolith Group”
Thursday, Nov. 12, 6:30 p.m.
Hosmer Auditorium, Everson Museum of Art (401 Harrison St.)

Sagar founded the London-based Otolith Group with filmmaker Kodwo Eshun in 2002. She will discuss the duo’s research-based filmmaking and curatorial practice, as well as their film “Anathema” (2011), which will be projected onto the exterior of the Everson Museum building.

Sponsors: Urban Video Project and Light Work Visual Studies, administered by Light Work and Syracuse University; Syracuse Symposium; Visiting Artist Lecture Series in the School of Art and the Department of Transmedia, both in VPA; Coalition of Museums and Art Centers; Connective Corridor; Everson Museum of Art; and New York State Council on the Arts

An expert in North American art from the colonial period to the present, Roberts is the Elizabeth Cary Agassiz Professor of the Humanities in Harvard University’s Department of History of Art + Architecture. She investigates a key question that lies at the intersection of network studies and print studies: How do we define the relationship between social networks that replicated images enable, and the physical networks enabling those images to be replicated in the first place? 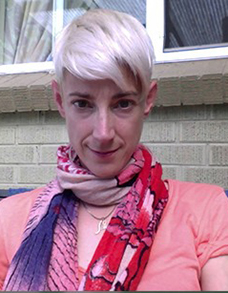 Director of CU-Boulder’s Media Archeology Lab, Emerson studies the digital humanities, along with media theory and archeology, the histories of computing and telecommunications, and experimental writing. She is currently working on a two-part book project about the shift from liberationism via telecommunications networks in the 1970s and ’80s to libertarianism via the Internet, starting in the early ’90s.

Sponsors: Department of Art & Music Histories and the Writing Program, both in A&S, and Syracuse University Libraries

Evan Selinger, professor of philosophy at the Rochester Institute of Technology (RIT) and a senior fellow at the Future of Privacy Forum in Washington, D.C.
“Networked Ethics After Facebook’s Emotional Contagion Experiment”
Tuesday, Dec. 1, 3:30 p.m.
500 Hall of Languages

An expert in ethical issues surrounding technology, science and law, Selinger is also involved with RIT’s Center for Media, Arts, Games, Interaction and Creativity, and serves as a fellow at the Institute for Ethics and Emerging Technologies in Connecticut. His presentation will address key ethical issues surrounding networked culture, with emphasis on Facebook’s recent contagion experiment, in which the news feeds of nearly 700,000 users were manipulated to assess the effects of their emotions.

Sponsor: The Writing Program in Arts and Sciences