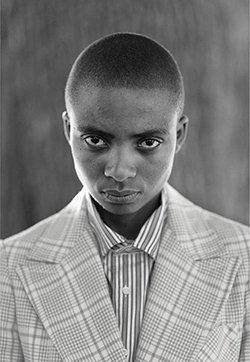 A photo from Zanele Muholi’s exhibition

A self-described “visual activist,” Muholi has dedicated her work and life to increasing the visibility of black lesbian, gay, bisexual, transgender and intersex people. Despite South Africa’s laws forbidding discrimination based on sexuality, violent crimes against gays and women have increased. Muholi’s self-proclaimed mission is “to rewrite a black queer and trans visual history of South Africa for the world to know of our resistance and existence at the height of hate crimes in SA and beyond.”

Muholi has won numerous awards, including the 2015 Ryerson Alumni Achievement Award  and the Fine Prize for an emerging artist at the 2013 Carnegie International. Her “Faces and Phases” series has been shown at Documenta 13, the South African Pavilion at the 55th Venice Biennal and the 29th São Paulo Biennale, among others. She was shortlisted for the 2015 Deutsche Börse Photography Prize for her publication “Faces and Phases: 2006-14” (Steidl/The Walther Collection). Muholi is an honorary professor of the University of the Arts, Bremen.