Light Work, in partnership with Autograph ABP, will present “Rotimi Fani-Kayode (1955-1989),” a solo retrospective of the work of this seminal and highly influential figure in 1980s black British and African contemporary art. Although his career was cut short by his untimely death at the age of 34, Fani-Kayode nonetheless remains an important influence in contemporary photography. 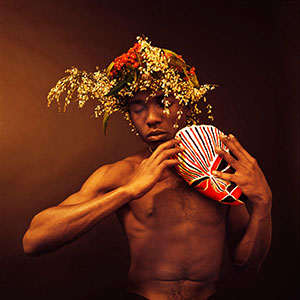 Also on view is “2015 Light Work Grants in Photography: Allison Beondé, Thilde Jensen, Costa Sakellariou” in the Light Work Hallway Gallery. All events are free and open to the public.

Ancestral rituals and a provocative, multi-layered symbolism fuse with archetypal motifs from European and African cultures and subcultures, inspired by what Yoruba priests call “the technique of ecstasy.” Hence, Fani-Kayode uses the medium of photography not only to question issues of sexuality and homoerotic desire, but also to address themes of diaspora and belonging, and the tensions between his homosexuality and his Yoruba upbringing. This exhibition coincides with the introduction of new punitive legislation in Nigeria, Fani-Kayode’s country of birth, as well as other countries in Africa in recent years outlawing same-sex marriages and membership in gay rights organizations.

Fani-Kayode was born in Lagos, Nigeria, to a prominent Yoruba family that left Africa as refugees in 1966 and moved the United Kingdom. He later studied at Georgetown University and the Pratt Institute before settling permanently in London in 1983, where he lived and worked until his early death from a short and unexpected illness on Dec. 21, 1989. A prominent figure in the black British art scene, Fani-Kayode was the founding member and first chairman of Autograph ABP (Association of Black Photographers) in 1988. His photographs have been exhibited internationally since 1985, with numerous recent solo exhibitions in London, Boston, New York and Cape Town. In 2003, his work featured in the African Pavilion at the 50th Venice Biennale and in 2011 in ARS 11 at Kiasma-Museum of Contemporary Art in Helsinki, Finland.

Fani-Kayode’s work is represented in the collections of numerous institutions and private collectors, including the Victoria & Albert Museum, Walther Family Foundation, Harvard University’s Hutchins Center, Kiasma-Museum of Contemporary Art and the collection of Yinka Shonibare MBE, among others. Many of his photographs were created in collaboration with his late partner, Alex Hirst, and are collected in the posthumous 1996 publication “Rotimi Fani-Kayode” and “Alex Hirst: Photographs.” His work is represented by Autograph ABP, London.