Temples, Shoji and Bento Boxes: An Architectural Tour of Japan 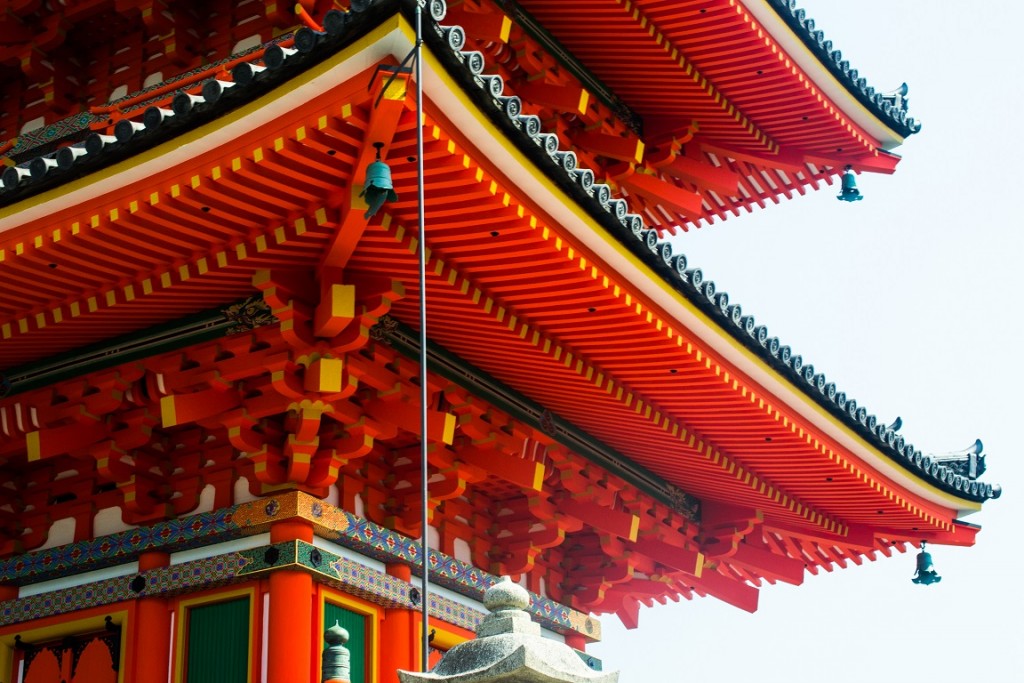 Syracuse University Abroad students explored many historical and modern sites during a summer session in Japan. (Photo by Thomas Kuei)

A group of Syracuse University Abroad students went searching this summer for the meaning of “japan-ness” as a design perspective during a month-long exploration of Japan.

They found it in the wooden pillars of the Kiyomizudera temple in Kyoto, the austere concrete of the Church of the Light in Osaka and the scrumptious delights placed in the compartments of a bento box, among many other sites and experiences.

The theme of “japan-ness” can’t be fully understood within one building, says architecture student Thomas Kuei ’18.

“Japanese architecture has developed within its unique ecosystem, and thus has had an incredibly rich history through which its buildings have transformed,” Kuei says. “These different types of architecture all work together to tell a story of Japan’s architecture and how the entire field has taken on a life of its own.” 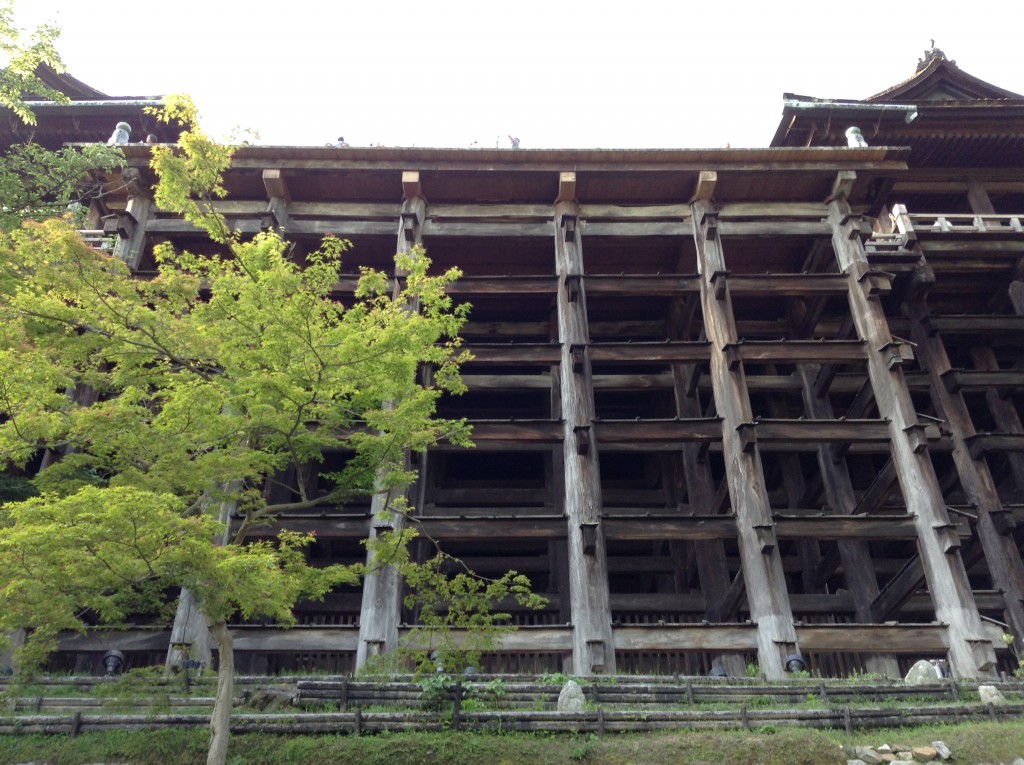 The summer SU Abroad program “From Shoji to SANAA: Japan-ness in Architecture” explores the origins of Japan’s profound influence on Western architecture and design, in terms of such factors as space, material and lightness.

Traveling to Kyoto, Osaka, Tokyo and islands in the Inland Sea, students saw traditional architecture and the modern works of such important architects and firms as Tadao Ando, SANAA, Kengo Kuma, Atelier Bow-Wow and Amorphe. 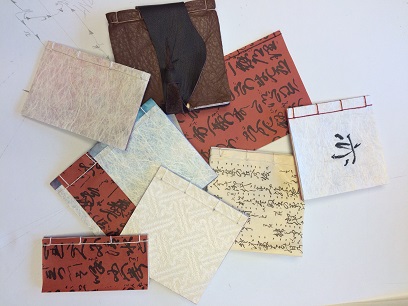 Booklets made and bound by the students (Photo by Zeke Leonard)

In the six-credit program, students took two courses: “Scale, Materiality and Dwelling in Japan,” led by School of Architecture Professor Anne Munly, and “Materiality and the Hand,” led by Environmental and Interior Design Assistant Professor Zeke Leonard in the College of Visual and Performing Arts.

Munly had been named a Laura and L. Douglas Meredith Professor of Teaching Excellence and wanted to use the funding to create a course that would appeal to architecture and non-architecture students.

Leonard joined in 2013, bringing furniture-making and wood-working insights to the program. 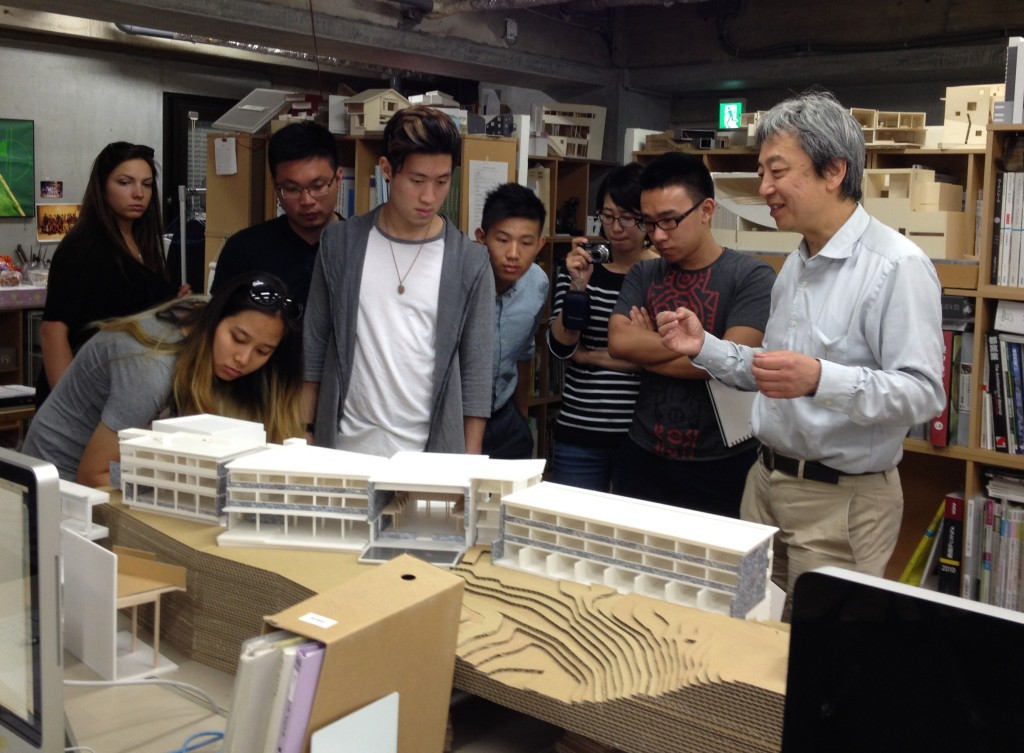 Students met with several architects during their Syracuse University Abroad experience in Japan, discussing the architects’ process, aesthetics and buildings. In this photo, Kiyoshi Sey Takeyama of Amorphe Architects in Kyoto speaks with students. (Photo by Anne Munly)

“Wright was strongly influenced by his trips to Japan and imported Japanese traditions of building and making space,” Munly says. “European and American architects who traveled to Japan were looking at buildings of the 16th century, but they were seeing in them a proto-modern condition. I wanted to take the students to Japan to look at roots of the modern home.”

Wright and others incorporated certain features from Japanese structures into their buildings and in turn those features were filtered into popular homebuilding designs. For example, the 20th-century American split-level home developed from the ideals of a certain style of Japanese home with its change in floor plane, low horizontal frame and large, wide windows, Leonard says.

The term “japan-ness” comes from historian and architect Arata Isozaki and his book “Japan-ness in Architecture” (MIT Press, 2011), which examines the Japanese aesthetic in historical and contemporary forms.

In traditional Japanese construction, interior space is flexible and there is an important connection to nature—through man-made gardens—and an awareness of light and shadow. 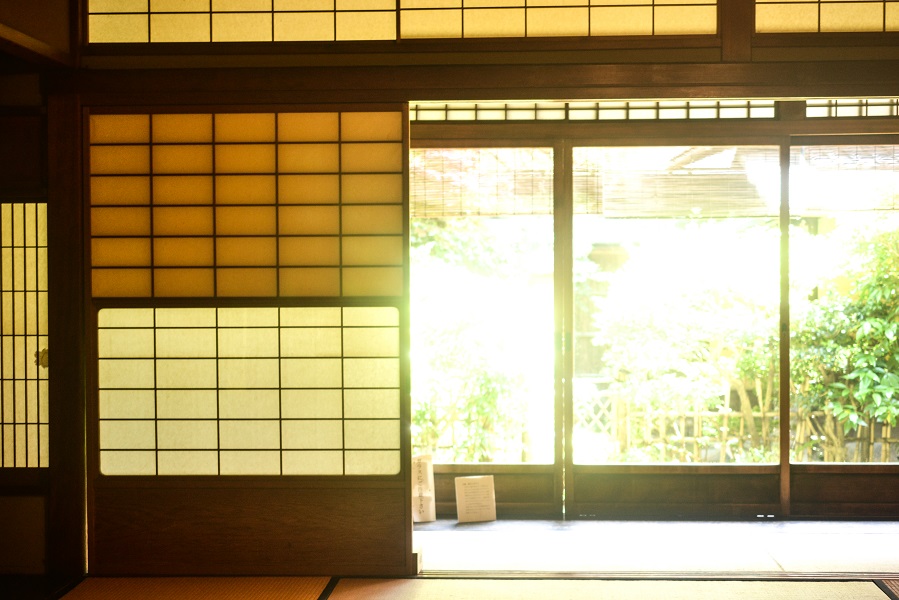 Architectural graduate student Yifei Cai recognized that connection in their visit to the Yoshijima House, a former merchant’s home in Takayama, that incorporates several distinct gardens and tatami mat rooms.

Traditional shoji—a door or a room divider constructed of paper and wood—are used to open a home to the outdoors and separate large interior spaces. 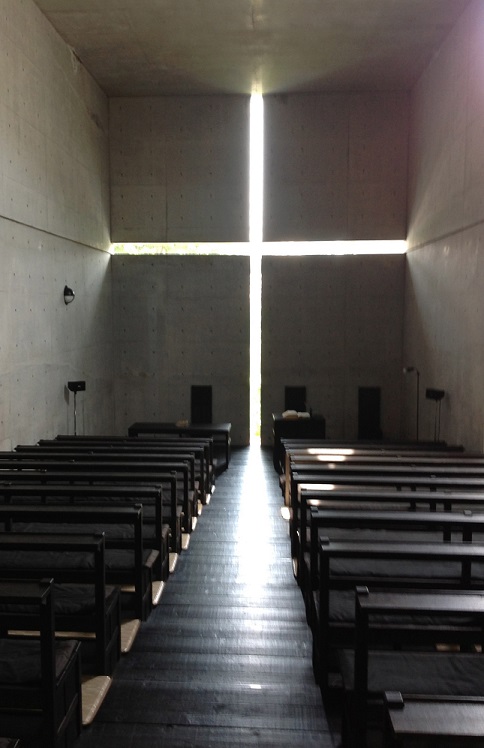 “When the shoji is completely opened, there is no barrier between people and nature, the interior space becomes open,” Cai says.

“When the shoji is ajar, the relationship between nature and interior is ambiguous,” Cai says. “When you close the shoji, the shoji can be considered as a window. So you may find different kinds of changes.”

Another site, the Church of Light, a United Church of Christ chapel designed by Tadao Ando, makes use of light through its stark concrete and the cut form of a cross behind the altar.

“In order to highlight the light, the building material is very pure,” Cai says.

It’s important for students to experience those nuances and appreciate how places and materials can evoke a response. 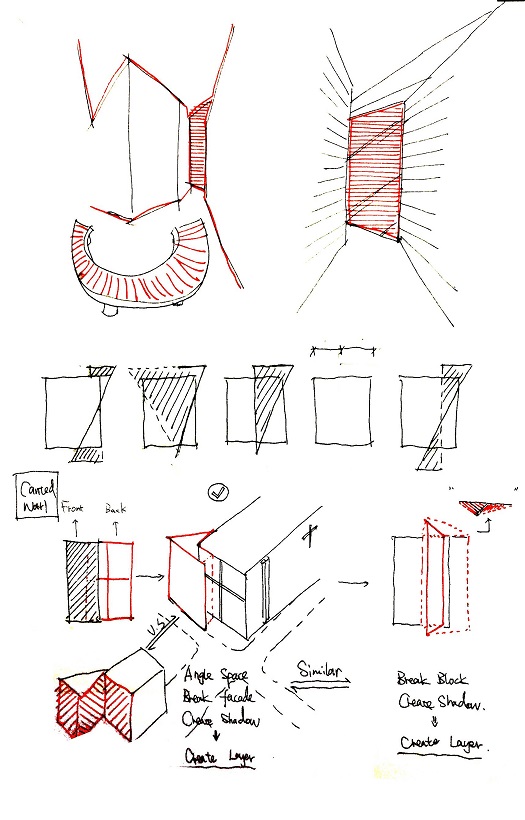 Sketch of the Church of the Light by student Yifei Cai

“You’re standing in this massive wooden Buddhist temple from the 1600s. You can smell the incense, you can hear praying and the gong ringing,” Assistant Professor Zeke Leonard says. “Then you go to the Church of the Light. It’s all concrete. You can feel the cold clamminess that hangs in the air.”

Leonard, who calls the Church of the Light “possibly one of the smartest pieces of architecture ever conceived,” wants students to understand the emotive response and analyze what the space is made of that makes it elicit that response. 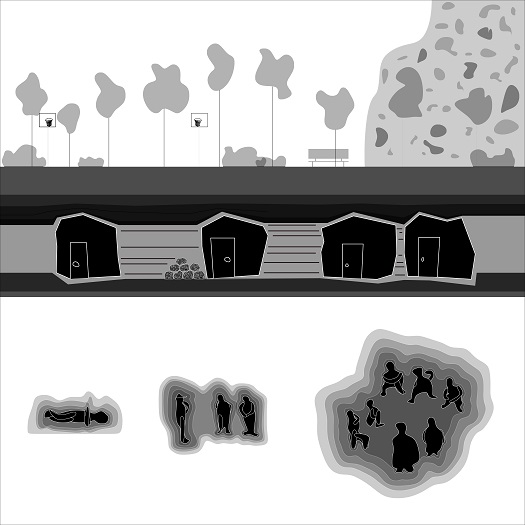 Kuei was fascinated by the sense of past, present and future in Japanese architecture.

“While there is still a push to preserve important historical artifacts and sites, there has also been a push for an architecture that is meant to be changed every 15-20 years,” Kuei says.

Students visited the Muji house, a minimalist pre-fab home in Tokyo. Muji is a chain store that sells a variety of home goods and apparel and has now branched into the sale of ready-made homes. 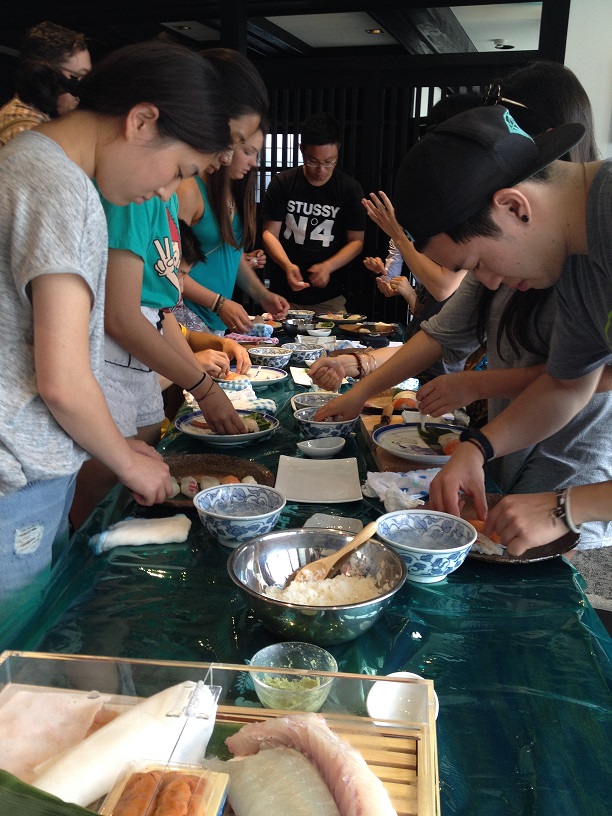 Led by a master sushi chef, students learn how to make sushi during a workshop in Kyoto and then sample their creations. (Photo by Anne Munly)

“The ideas surrounding the pre-fabricated homes were incredibly interesting to study and grapple with,” Kuei says. “We ended up having a great group discussion of the validity of these types of architecture and what impact prefab homes would have on the future of architecture.”

Along with the tours of various buildings, students also experienced outdoor markets, exhibitions and the art of sushi-making with a master sushi chef who led students in making their own sushi.

“Students are exposed to architects who are very skilled at their craft, architects who have reinterpreted those traditions to make really good contemporary work,” Munly says.

View below for more photos of the sights and experiences enjoyed by students in the Syracuse University Abroad summer program in Japan. 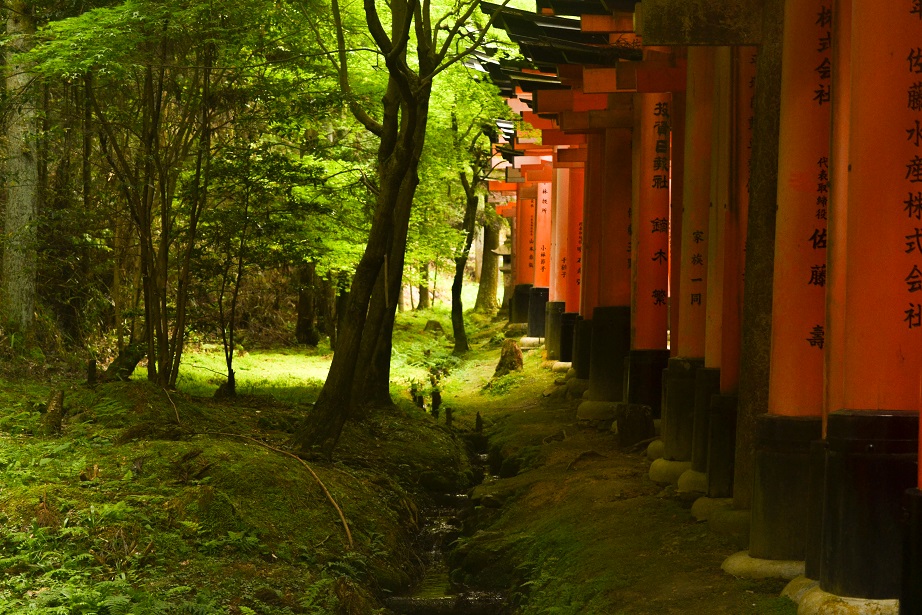 A section of the 1,000 torii gate hike at Fushimi Inari-Taisha Shrine outside of Kyoto (Photo by Thomas Kuei) 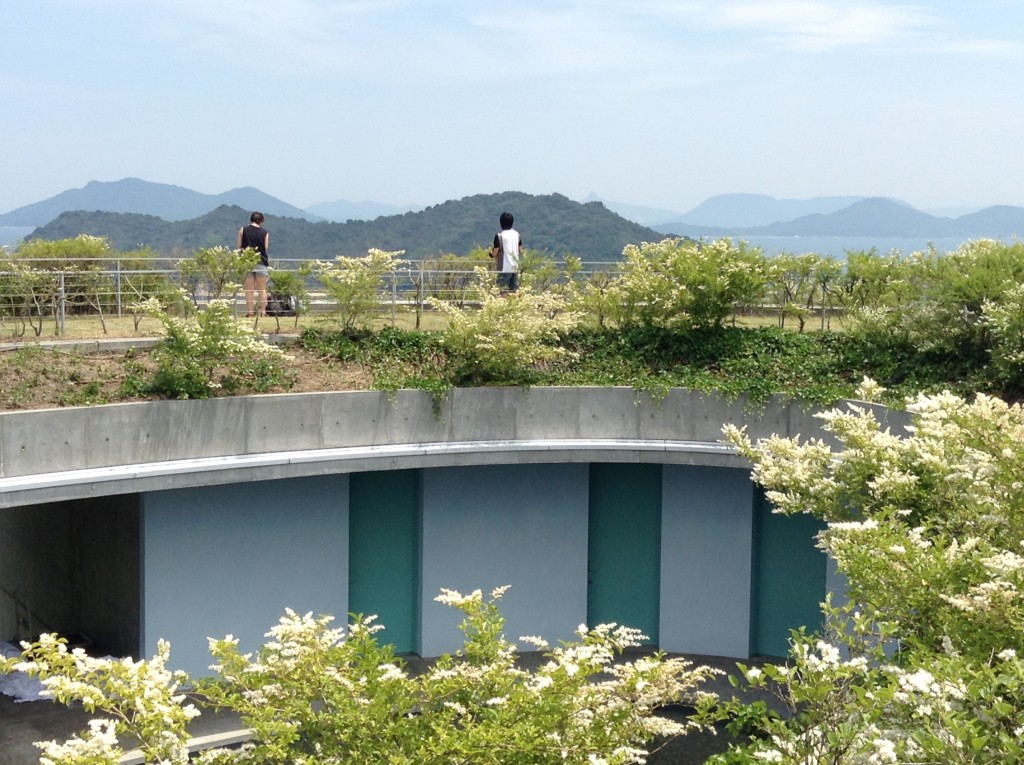 Students sketching at he Benesse House Oval, designed by Tadao Ando, on the island of Naoshima in the Seto Inland Sea (Photo by Anne Munly) 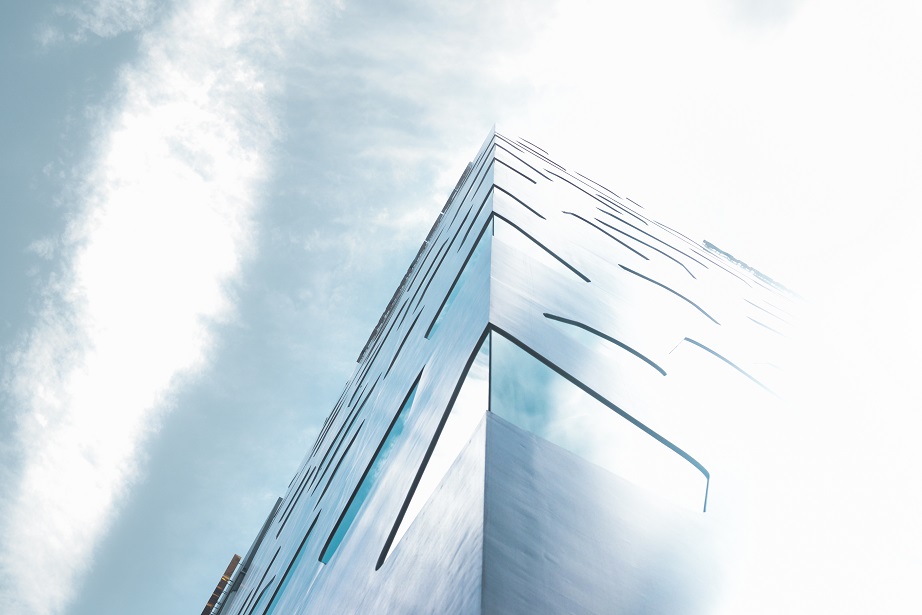 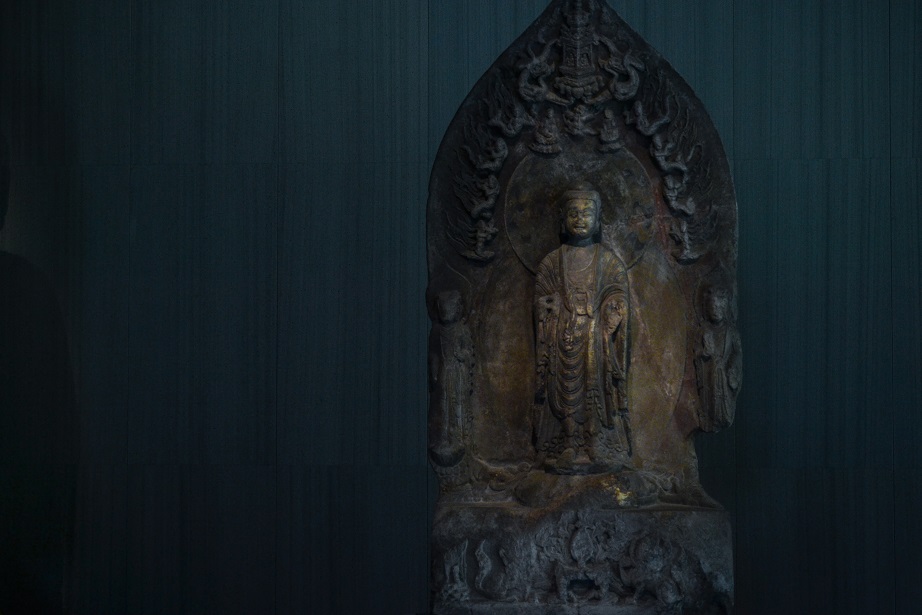 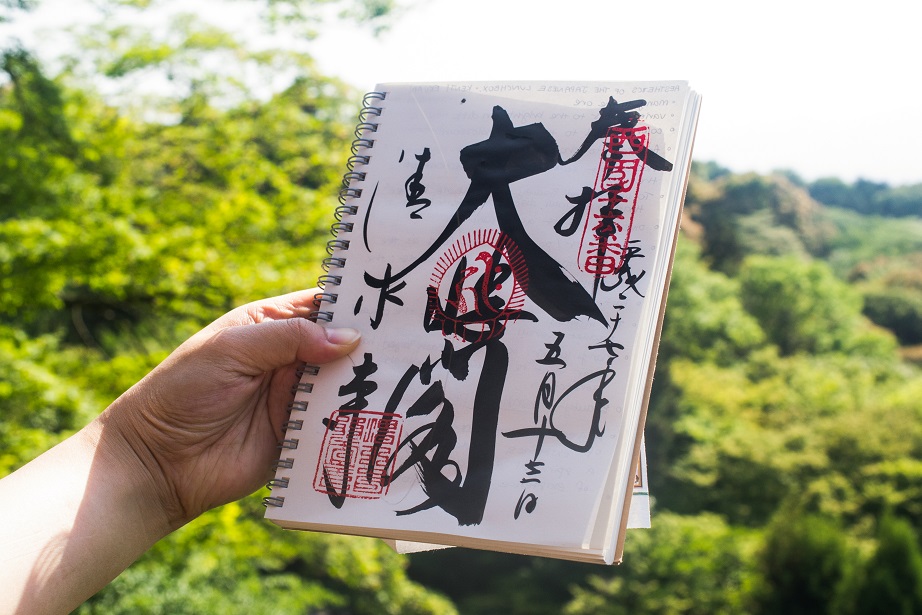 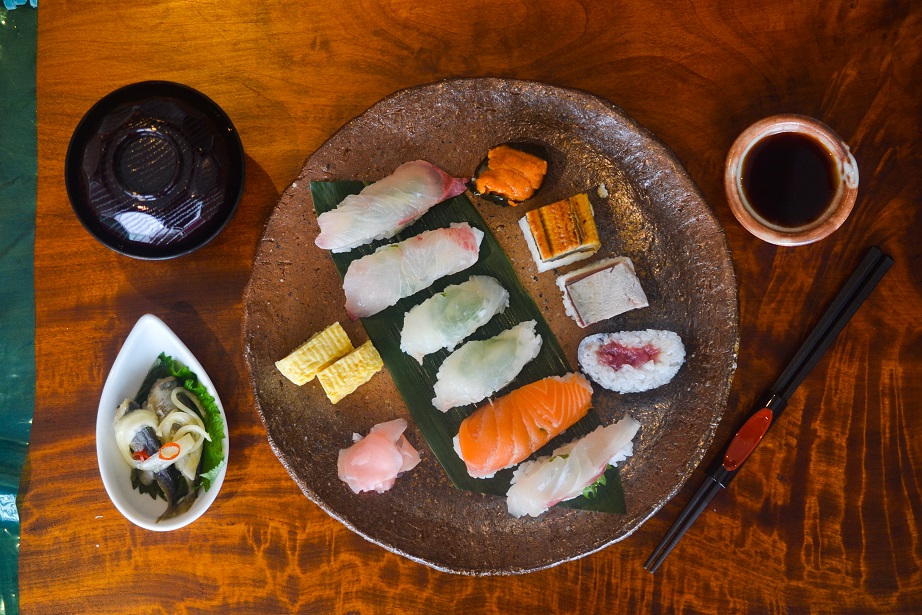 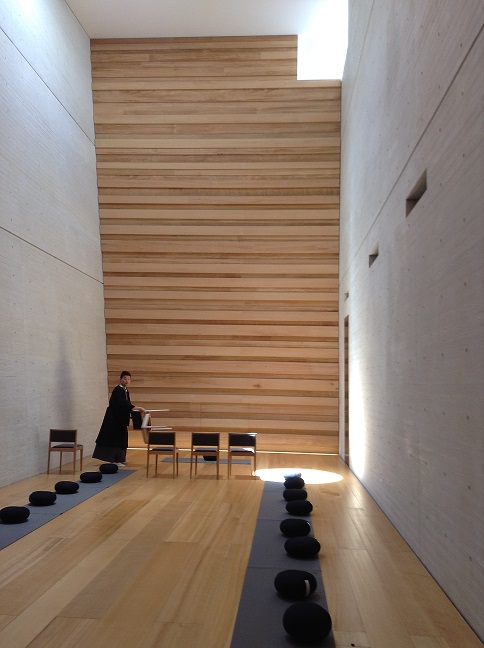 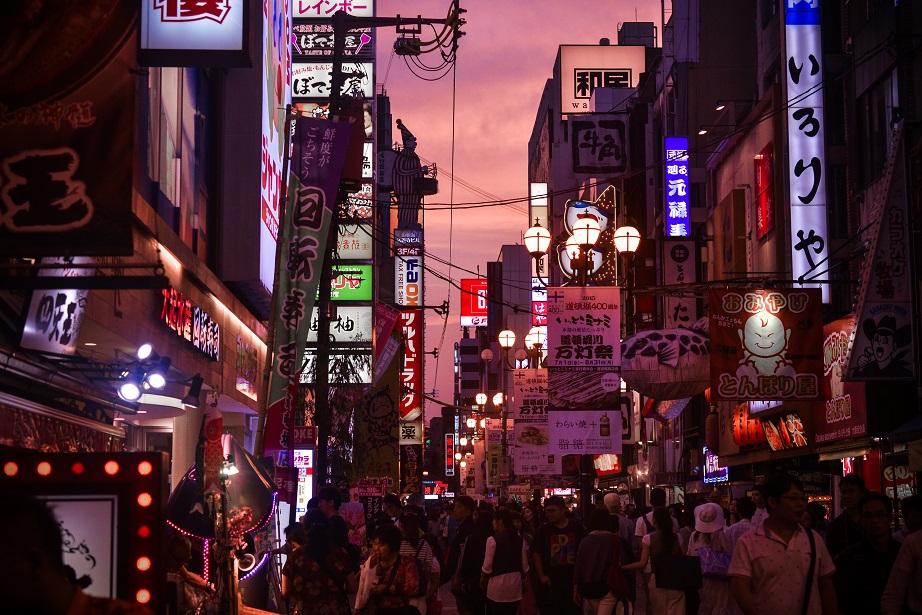