On Thursday, Aug. 13, at 3 p.m. the Lerner Center for Public Health Promotion, in collaboration with the Near Westside Initiative and the City of Syracuse Parks Department, unveiled a renovated box soccer court at Skiddy Park. The unveiling will take place during the sixth Annual Near Westside Block Party, scheduled from 1-5 p.m. at the park on the comer of Otisco and Tioga streets. 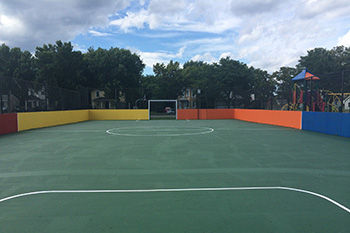 The unveiling included brief remarks, a soccer demonstration by the University’s women’s soccer team as well as the Syracuse Silver Knights, and a visit from Otto.

This renovated box soccer court is the result of a grant from the New York State Health Foundation’s Healthy Neighborhoods Funds Initiative. In January 2015, the Lerner Center for Public Health Promotion at the Maxwell School was selected to receive a two-year grant totaling $250,000 to fund the Near Westside Healthy Neighborhood Initiative, a partnership of community agencies led by the Lerner Center and the Near Westside Initiative at Syracuse University, St. Joseph’s Hospital Health Center and Nojaim Brothers Supermarket. Other partners include Cornell Cooperative Extension, the Fitness Inclusion Network, Worktrain and the City of Syracuse Parks Department.

The grant focuses on improving access to healthy foods, improving the built environment and connecting residents to community programs. The partnership, with feedback from residents, took a seldom-used tennis court at Skiddy Park and converted it into a colorful box soccer court. The new court is open for use to all residents.

The initiative builds on investments made in the Near Westside over the past several years. With support from Syracuse University, the State of New York, the City of Syracuse, private foundations, businesses, not-for-profit organizations and neighborhood residents, the Near Westside Initiative has strengthened the community by fostering economic development, introducing arts, and supporting education.

“We value the work we do with our partners and residents in making the Near Westside a healthier community. The renovated box soccer court is just one example of how the built environment can encourage and promote positive activities in the neighborhood,” says Rebecca Bostwick, program director of the Lerner Center for Public Health Promotion.