From Aug. 3-7, 45 students from the Syracuse City School District in grades 7-12, lived on the Syracuse University campus and participated in an academic schedule as rigorous as most college students’. They were part of the NSBE Jr. program, hosted by the Upstate Louis Stokes Alliance for Minority Participation. The National Society for Black Engineers (NSBE) Jr. program is for pre-college students, designed to stimulate interest in science, technology, engineering and mathematics (STEM) fields. The goal is to encourage students to attend college and pursue technical degrees. 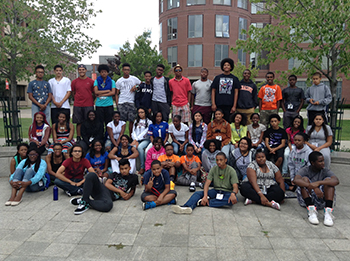 Participants in the NSBE Jr. program

Gwen Raeford, NSBE camp coordinator and co-adviser of NSBE Jr., explains that this year’s camp theme is forensic science. “The students are solving a crime,” she says. “Teams work through eight stations, including blood splatter analysis, fingerprint analysis, handwriting analysis and more. At the end of the week, the teams compare data to solve the crime based upon their findings.”

Instructional time each day is also dedicated to mathematics, science concepts and English language arts. Hamilton says this is because NSBE Jr. seeks to prepare its students for college admissions and the PSAT, SAT and ACT. Additionally, students participated in hands-on activities like LEGO robotics, scavenger hunts and arts activities in the evenings.

Syracuse City students who participate in the NSBE Jr. program are committed to more than just the five-day camp at Syracuse. NSBE Jr. is a year-long commitment that includes regular workshops and the completion of a final project that will be presented in competition at the NSBE national convention in the spring.