William C. Banks, Board of Advisers Distinguished Professor of Law and founding director of the Institute for National Security and Counterterrorism (INSCT), has been named the College of Law’s interim dean, effective Aug. 1. Banks has more than 35 years’ experience at the college as a professor and holds a joint professorship with the Maxwell School. He will remain a professor and director of INSCT during the University’s search process. 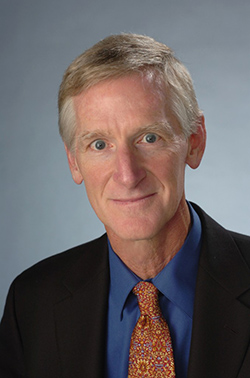 Banks is a highly regarded expert in national security and counterterrorism law, having written or co-written several books on these subjects, including “Soldiers on the Home Front: The Domestic Role of the American Military,” “New Battlefields/Old Laws,” “Counterinsurgency Law” and “National Security Law and Counterterrorism Law.” He helped launch INSCT in 2003 as a joint undertaking of the College of Law and the Maxwell School as an interdisciplinary center tasked with addressing the growing intersection of national and international security and counterterrorism law and policy. Under Banks’ leadership, INSCT has risen to be a recognized international leader in research and education in national and international counterterrorism and security.

Most recently, INSCT hosted a major cyber espionage conference along with the NATO Cooperative Cyber Defense Centre of Excellence. More than 20 academics, policy makers and industry leaders discussed the impact of cyber espionage on the global economy and potential methods to combat the issue from technical, legal and policy standpoints.

“Interim Dean Banks brings many years of experience as both a noted professor and researcher and as a successful administrative leader to the College of Law,” says Interim Vice Chancellor and Provost Liz Liddy. “In selecting him for this role, I know Bill will provide the strategic vision and advocacy the College of Law requires to continue its strong forward momentum.”

A graduate of the University of Nebraska (B.A. 1971) and the University of Denver (J.D. 1974, M.S. 1982), Banks joined the College of Law faculty in 1978. He was appointed a professor of public administration in the Maxwell School and was named a Laura J. and I. Douglas Meredith Professor for Teaching Excellence in 1998. Banks is a Distinguished Fellow of the Institute for Veterans and Military Families and serves as editor-in-chief of the Journal of National Security Law & Policy.

“This is an exciting time at the College of Law. We have a tremendous facility, Dineen Hall, from which our faculty and students can teach and learn the law and professional skills essential for 21st-century practice,” says Banks. “I will be focused on working with my colleagues to ensure that our academic programs remain innovative and that the college continues to explore new avenues that keep Syracuse University College of Law at the forefront of legal education.”