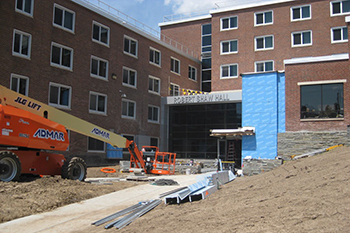 Shaw Hall is getting a new address, but that’s not all.

Students living in Shaw Hall will notice some significant changes when they return to campus next month, namely a new entrance and a new address. It’s part of a substantial four-year construction project with renovations “from top to bottom and end to end,” according to Assistant Director for Capital Projects Rex Giardine.

“Nearly everything that students touch, from residence hall rooms to bathrooms to common areas (in Shaw) has been renovated during this time frame,”he says.

Students and staff members who work at Shaw will notice the change as soon as they arrive at the building’s entrance, which is now located off Euclid Avenue. The new building address will be 201 Euclid Ave. The official address change will occur on Aug. 1.

The change in the entrance isn’t the only thing students will notice. Giardine says renovation work has opened up underutilized space on the ground level. This is where new student lounges and common areas will be located. Laundry facilities (Giardine calls it the “common denominator for the whole building”) have also been moved closer to the common areas, meaning students can meet and get work done without having to babysit a tumbling dryer.

Along with changes on the inside come changes on the outside. Short-term parking has been created curbside on Euclid Avenue, making pick-up and drop-off easier. Giardine gives credit to the City of Syracuse for its cooperative work with the University in facilitating the work. He also gives credit to the Shaw project itself, which he called a “fabulous tranformation that’s been a long time in coming. Anytime you are spending money on enhancing the student experience, it’s money well spent,” he says.

The renovations at Shaw are among the many projects benefiting students returning to campus in August. We’ll be highlighting more of the changes in an upcoming Syracuse University News video in mid-August.