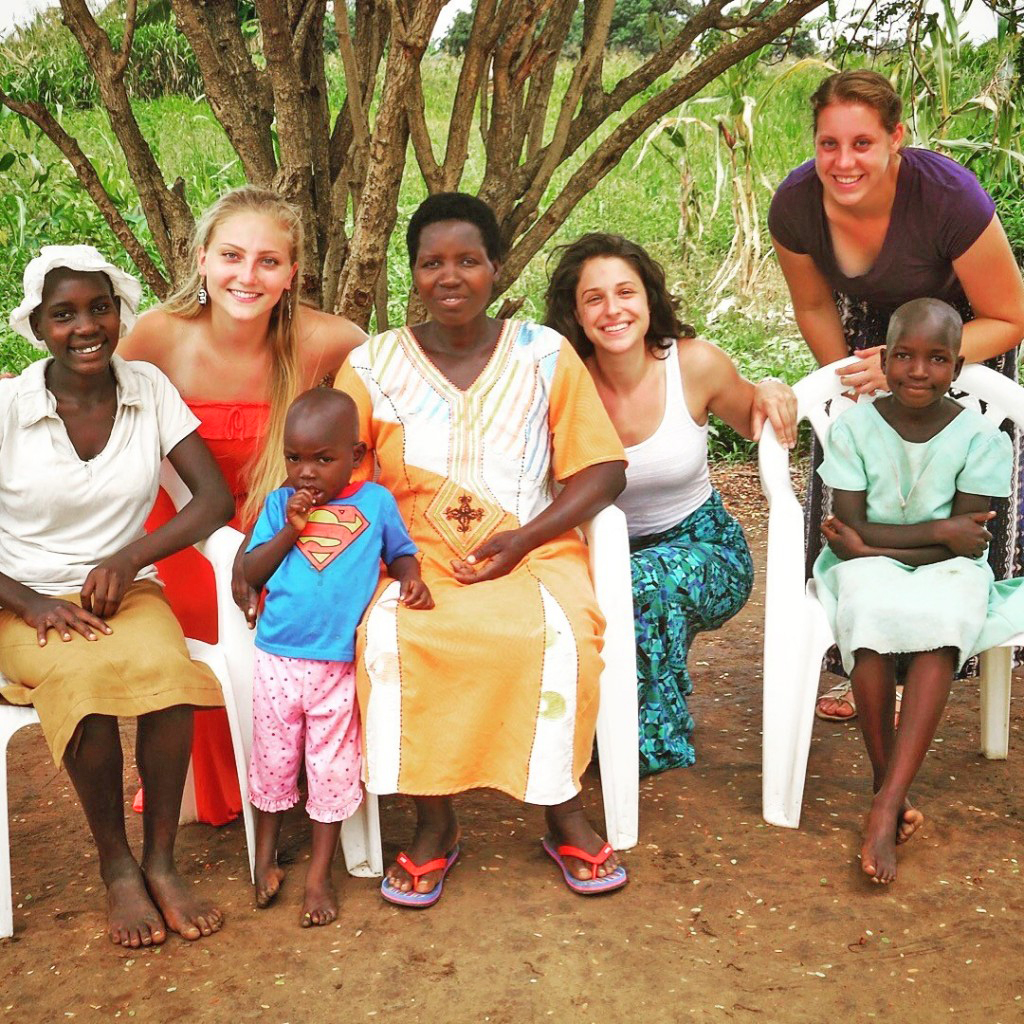 Students with the Syracuse University chapter of Nourish International stayed with host families during their partnership work in Uganda in May and June. In the back, from left, are students Alexandra Schmidt, Kelsey Modica and Lynsey Cooper. The family members are Maureen, Salumae, Betty and Rebecca.

Residents in the rural district of Oyam in northern Uganda were at first unsure about Alexandra Schmidt ’16 and her fellow interns with Nourish International.

Working in partnership with Global Health Network (Uganda), the students from the Syracuse University chapter of Nourish traveled to the east African nation in May for six weeks to help with health projects and livelihood initiatives. The area is recovering from a long civil war that, along with the loss of life and devastation, disrupted the livelihoods of the residents.

Often there can be skepticism about the intention of Westerners bringing their own values or just giving handouts, Schmidt says.

The students showed their purpose was different.

“Throughout the six weeks, we were able to work with them, live in their homes and be part of their family. We were there as equals,” Schmidt says.

“Several residents told us ‘We realized even though we may be different in appearance we have the same blood and we’re still family and everyone can work together,’” Schmidt says. “That was one of the most rewarding things for me, to give that sense of hope, build those relationships and possibly work with them in the future.”

Being able to live and interact with a family was also the best part of the experience for Kelsey Modica ’15. “I developed such a close relationship with my family and an extreme admiration for their resilience,” she says. 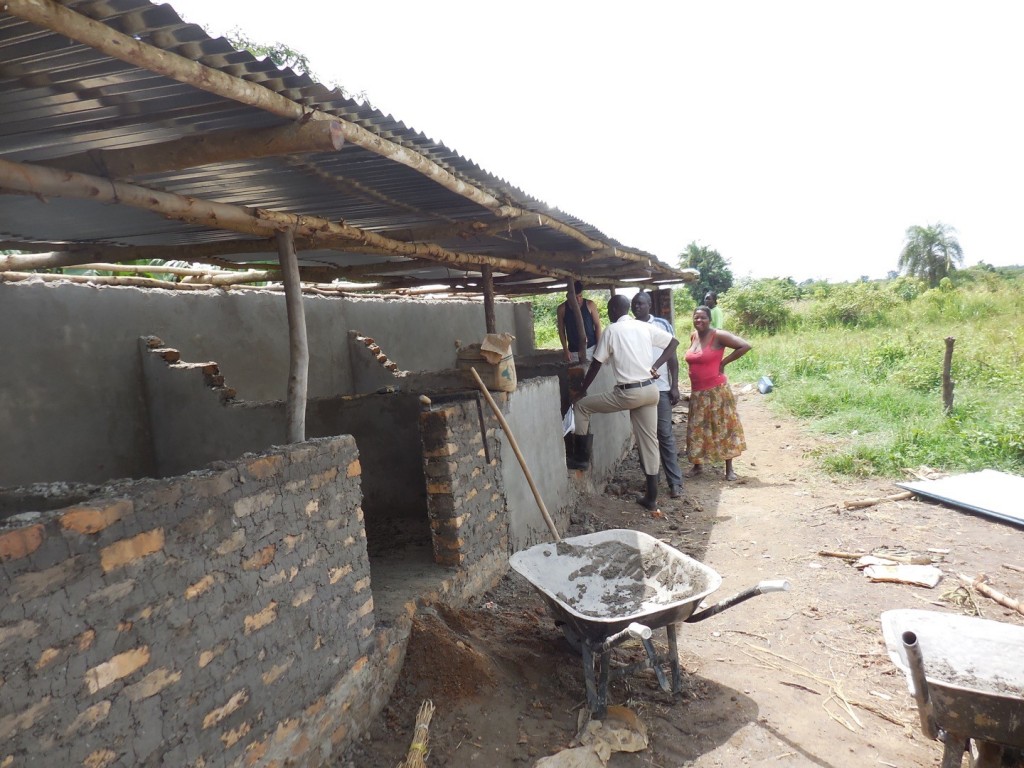 Students worked on pig enclosures that would help residents to create a source of income.

Schmidt, who joined Nourish last fall, was the project leader for the student group, which also included Makayla Dearborn ’17, Jessie Ringiewicz ’16, Olivia Sage ’16, Karla Vera ’18, Brad White ’17 and Lynsey Cooper ’16, who were selected to participate in the trip after applying.

The student chapter, which was organized two years ago, works with Nourish International, based out of North Carolina with chapters throughout the country, to select a chapter partner. This is the second year of a two-year partnership with Global Health Network (Uganda) (GHN(U)).

GHN(U) provided information on the community’s needs to the students, who then planned for three projects—establishment of three piggeries, health education and a sewing project to help the women create reusable cloth sanitary pads.

“In general, we were helping to promote holistic health, hygiene and sanitation through education and livelihood initiatives,” Modica says. “In order for people to be able to afford something as simple as soap, they need to have a source of income, which is particularly challenging for women in the community.”

The projects, including resources and materials, were planned out by the students before they arrived in Africa. 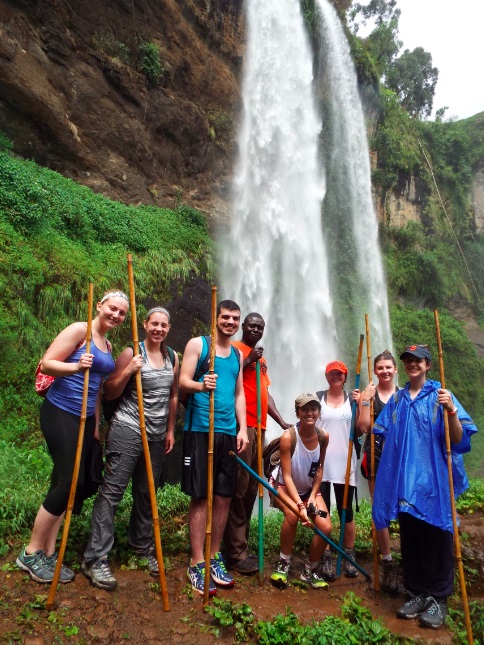 Students enjoyed a hike to Sipi Falls during a break in their work.

Once the students reached the city of Loro, they stayed in a guest house and then later lived with host families. They underwent orientation through members of GHN(U), who gave them information about understanding and adapting to the culture.

The students, who communicated with residents through GHN(U) members who spoke English, visited health centers in the community to provide information on hygiene and prenatal and basic maternal health. “A lot of people don’t know they need to be seeing the doctor once they find out they are pregnant, and there are certain things they can be doing with foods and nutrition to assist with their care,” Schmidt says.

Sometimes that can be difficult, though, because there isn’t a nearby grocery store to choose from a variety of foods. “That’s one of the biggest challenges, to adapt to the culture and make the goals we’re trying to implement with them realistic,” Schmidt says.

The students also worked with women’s groups to train them on a sewing machine to be able to create the sanitary pads. Many girls are unable to afford sanitary pads once they begin menstruation, and as a result, drop out of school.

The piggery project was the biggest project they worked on. They had to clear the land, dig the foundation and lay bricks with cement and mortar.

Each of the structures, which were still underway when the students left, will hold six pig pens, enabling each family in the community to be given a male and female pig to generate income as new litters are bred.

Along with the work, students were able to visit attractions, including the source of the Nile; a series of waterfalls called Sipi Falls; and Murchison Falls National Park, where they saw wildlife on a safari.

But it was the simple joys of sharing a meal and activities with the residents that made a huge impact. 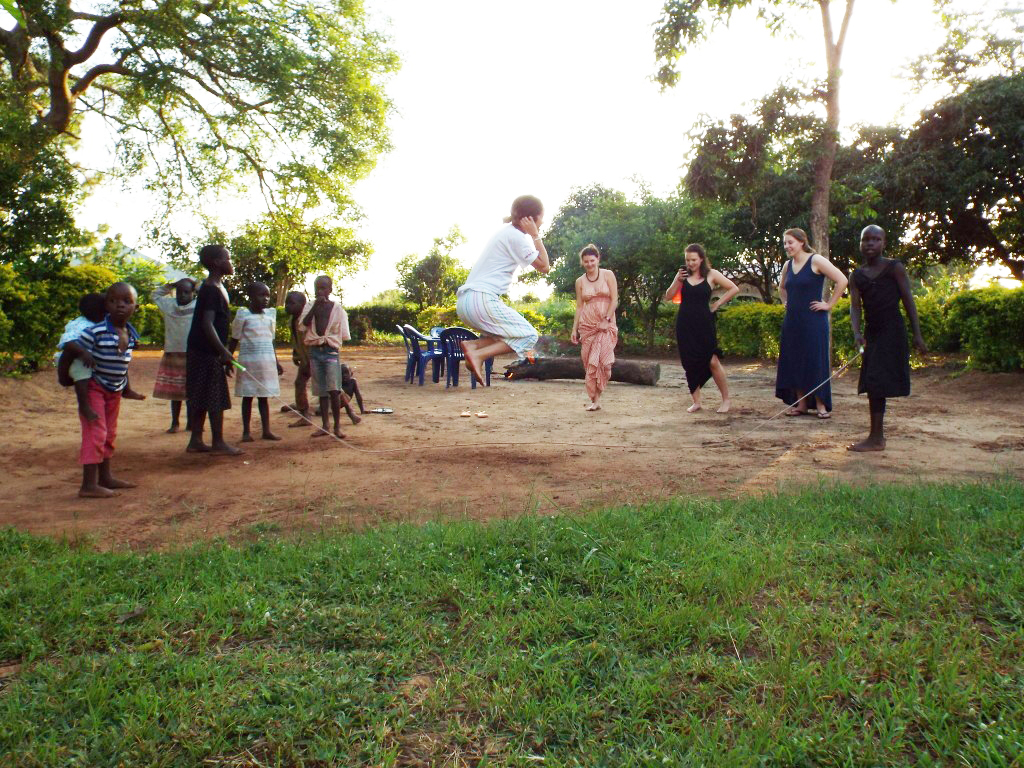 There’s always time for a game of jump rope.

“When we lived in the guest house, we had all the neighborhood children there bright and early ready to jump rope or play hand games,” Schmidt says. “Once we went to the homestay, it was great to come back after a day of work and talk with the host family and get an insight of what their life was like.”

Schmidt hopes to return to see how the piggeries have progressed, possibly during winter break. Next year’s trip has yet to be determined.

Modica, who graduated with degrees in French and international relations from the College of Arts and Sciences and the Maxwell School, plans to take what she’s learned from the experience and pursue a career working for the government, the United Nations or a nonprofit organization.

For Schmidt, the opportunity also validated her life’s goal.

“This is what I really want to do with my life,” says Schmidt, who is studying supply chain and management in the Whitman School of Management. “I can work with an organization that helps people with sustainable projects on a larger scale and really make an impact on people’s lives.”

Students created a video of their experience, which can be found at https://youtu.be/CHzy_jILv1I. 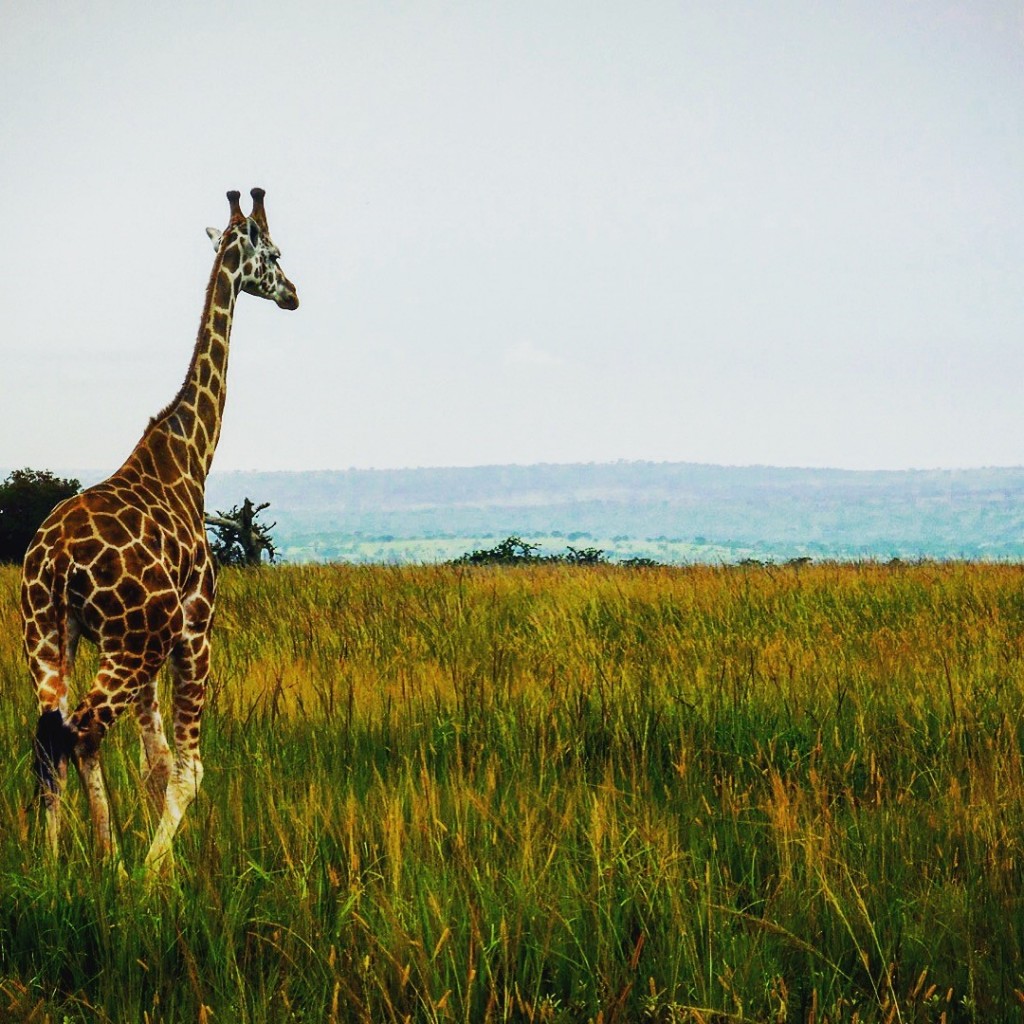 Modica captured this photo of a giraffe during a safari at Murchison Falls National Park.