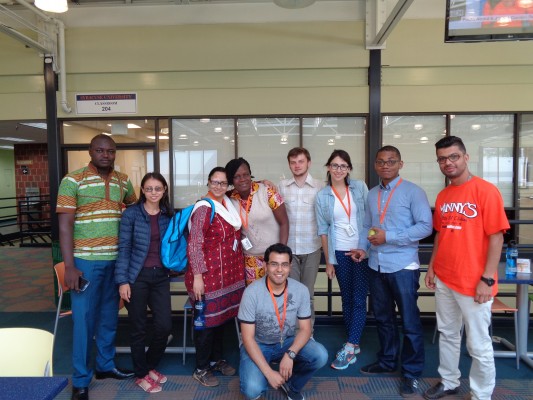 Fulbright scholars from around the world

Thirty-four Fulbright scholars from around the world have arrived at the University for an immersive four-week English language program.

The program, hosted by the English Language Institute, serves to provide international graduate students with language skills and cultural competency before they begin their studies at American universities and colleges. During the next four weeks, the Fulbright students will be living and studying on campus while learning about a variety of topics, from the U.S. government system to the culture within American higher education to using digital tools and online learning technologies. All the classes will be taught by University faculty and staff.

“The mornings are dedicated to intensive English language skills with a heavy emphasis on research skills, while the afternoons will focus on a broad range of topics and issues that many of these students will encounter while living in the United States,” says Senior Associate Dean and Director of English Language Institute Geraldine de Berly. “We are honored to assist many of these brilliant graduate students as they transition to a new life in the U.S.”

The Fulbright scholars hail from 27 different countries on four different continents including Afghanistan, Burkina Faso, Chad, Honduras, Haiti, India, Indonesia, Iraq, Laos and Russia, among many others. The majority of scholars are entering a master’s program studying a range of subjects, including agriculture, economics, engineering, literature, public health and political science.

All participants arrive with strong academic credentials and already have secured academic admission to U.S. institutions for advanced study at either the master’s or doctoral level. Participants study across the U.S. at a variety of institutions, from large, land-grant universities to small liberal arts colleges. Their fields of study range from the humanities to business and management, and from the social sciences to the hard sciences and technology.

This is the first of three years where the ELI will be hosting foreign-born Fulbright Scholars before they enter their programs of study. Syracuse University is one of nine U.S. institutions (out of a total 60 that applied) to participate in the program, which is overseen by the Institute of International Education.