Syracuse University officially becomes a smoke-free and tobacco-free campus on July 1 as a new institutional policy goes into effect promoting a healthy, productive and respectful environment. 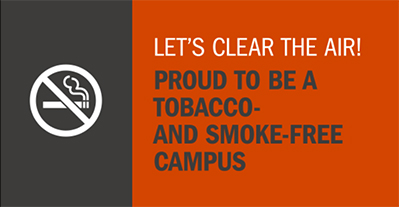 Smoking and the use of all tobacco products—including cigarettes, cigars, snuff, pipes, chewing tobacco and products that imitate the act of smoking, such as vapor cigarettes—will be prohibited on all property owned, leased or managed by Syracuse University, including outdoor spaces and University-owned vehicles.

The Carrier Dome, Sheraton Syracuse University Hotel and Conference Center, Drumlins and Syracuse Stage will remain smoke-free inside. Outside spaces at those venues will be exempt from this policy during events through July 2017. The phased exemption for the Carrier Dome will extend to event attendees in parking lots and in transit to and from the Dome. The policy will be explored for feasibility on Syracuse-affiliated campuses in international settings.

Cigarette butt receptacles are being removed from University spaces on July 1, and informational signage about SU’s status as a tobacco- and smoke-free campus has begun appearing in buildings and public spaces.

As of this past January, the University began offering free, six-week smoking cessation programs on campus for students, faculty and staff who desire to quit smoking or refrain from other tobacco use. Each program—consisting of seven one-hour classes in a six-week timeframe—is facilitated by Cynthia Cary, director of smoking cessation at SUNY Upstate Medical University.

According to the most recent data from the American Nonsmokers’ Rights Foundation, as of April 2, 1,543 U.S. and tribal colleges and universities had gone smoke-free, while 1,043 were fully tobacco-free. 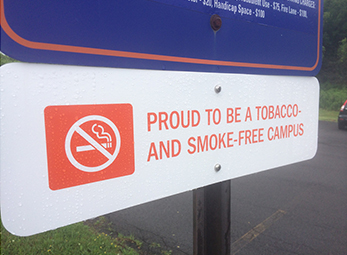 Signs have been posted around campus indicating the University’s new status.

The effort for SU to become smoke- and tobacco-free began in earnest in January 2008 with the formation of the Syracuse University Campus Sustainability Task Force on Campus Smoking and its detailed report on the topic to the University Senate. Many additional steps in the process followed, including the formation in 2010 of a Wellness Task Force charged with developing a strategic plan to identify and recommend a series of wellness programs and/or pilots to promote, create and support a healthier campus community and to reduce long-term health care expenditures.

“Implementation of the tobacco- and smoke-free campus is the result of more than a decade of conversation, consideration and hard work by multiple dedicated task forces of students, faculty and staff,” says Gail Grozalis, executive director of the University Wellness Initiative. “This policy reflects the ongoing investment the University has in the health and wellness of its members by helping to ensure a healthy, productive, respectful environment in which to learn, live and work.”

Additional information—including an FAQ and communications toolkits to help supervisors, employees and students communicate and engage in conversation about the policy—is available in the Tobacco-Free Campus portion of the University’s Wellness website.