In a landmark decision, the Supreme Court legalized same-sex marriage across the country Friday, setting off reverberations for broader impacts on equal rights. Maxwell School Associate Professor of Political Science Thomas M. Keck offered some perspective on the 5-4 decision. Keck, the Michael O. Sawyer Chair of Constitutional Law and Politics, is the author of “Judicial Politics in Polarized Times” and “The Most Activist Supreme Court in History” and teaches such courses as “The Supreme Court in American Politics” and “Sexuality and the Law.”

Q. What impact do you see this ruling as having?

A. Its immediate impact is that it legalizes full marriage equality for same-sex couples in the 13 states where that wasn’t already the case—37 states have already legalized it. That’s its immediate impact, but it’s likely to have broader long-term impact for equality for LGBT persons, beyond just marriage, that will play out over time.

Q. What sort of long-term changes could there be? What rights could now be affected for LGBT persons?

A. There’s a wide variety of different ways in which an LGBT person faces inequality and discrimination. One example is that there’s no federal law that bans employment discrimination on the basis of sexual orientation and about half the states have laws and the other half don’t. So we now have a situation where in a number of states it’s legal for same-sex couples to get married but it is also legal for their employer to read about that marriage in the newspaper and fire them the next day. That is unsustainable. As soon as a case like that happens, it’s going to draw widespread negative attention to the lack of employment discrimination protection and create more pressure to take that next step.

On marriage equality, we don’t really need more laws. There might be some holdout public officials in various states who try to resist, but the courts will make clear pretty quickly that the question has now been settled. But on other issues that are legally separate—such as employment discrimination—we’ll need state legislatures and likely Congress to step in and say that just as it’s illegal to fire someone on the basis of the race or sex or religion, the same should be true for sexual orientation. That would require new legislation.

Q. Was the decision surprising? 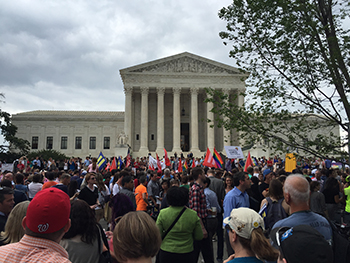 A crowd gathers to celebrate outside the U.S. Supreme Court building after the announcement of its ruling on gay marriage on Friday. (Photo by Noah Dougherty)

A. There wasn’t very much doubt about which way this was going to come out. The Supreme Court issued another decision on marriage equality just two years ago that clearly signaled we were headed in this direction. And even the fact that Justice Kennedy wrote the decision was not surprising. That was widely expected. But if you take a step back and look at the historical process that got us to this point, it is remarkable how quickly we’ve moved from a situation where LGBT persons essentially had minimal constitutional rights at best. There were no formal constitutional rulings protecting LGBT rights just a couple of decades ago. In a very short time we’ve moved quite the other way to this momentous decision. Constitutional change doesn’t always happen that quickly, but in terms of this particular case—that we were all waiting for—everybody quietly expected it to come out this way.

Q. Overall how would you describe this ruling?

A. It’s historic. It’s landmark. It’s momentous. It’s a day that LGBT persons in the United States will celebrate for many years to come. On the calendar date, it’s the same date that the court has previously issued two other landmark LGBT rulings. This date—June 26—is going to be a day that’s long celebrated in the LGBT community.

About three years ago, Seyeon Lee was invited by CenterState CEO, an economic development organization in Syracuse, to help design a women’s wellness center on the North Side of the city. Lee, an associate professor of environmental and interior design…

Feeding the Next Generation

Less than an hour’s helicopter flight northwest of the Haitian capital Port-au-Prince is the town of Anse Rouge, where the coastal landscape is a patchwork of squares, white mounds and tropical vegetation. Salt farming is the subsistence livelihood that Haitians…

Like communities across the United States, Central New York faces an acute shortage of mental health professionals, particularly those who work with children and families. The stigma of mental health issues, combined with long waits to see psychiatrists, psychologists, counselors…

Researchers in the Department of Communication Sciences and Disorders (CSD) are testing a cutting-edge method of electrical brain stimulation to help stroke patients suffering from a language disorder called aphasia. The National Institutes of Health-funded study, led by Ellyn Riley,…

Keep Safety in Your Summer Fun

Summer! The best time of year—play time, vacation and easier schedules for most of us. But in among all that recreation, keep an eye out for safety, so you can keep the fun coming. First and foremost, experts agree, get…