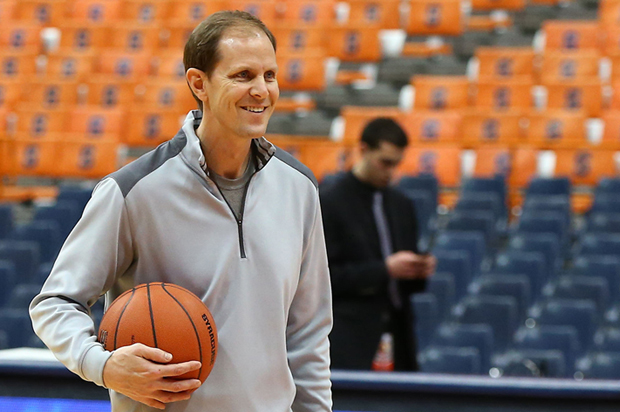 “For more than 25 years, Mike Hopkins has demonstrated the true meaning of Orange pride and loyalty,” says Chancellor Syverud. “He has contributed so much to the success of the Syracuse basketball program. I know Mike is ready to lead the program into the future and carry forward the success that has occurred under Coach Boeheim.”

One of the most popular student-athletes in Syracuse University basketball history, Hopkins has forged a successful career as an assistant coach, recently completing his 19th season on the Orange staff. While Hopkins has been on the coaching staff, Syracuse has advanced to 14 NCAA tournaments and four NIT berths. The Orange won the NCAA Championship in 2003.

“I’m honored, humbled and grateful for this special opportunity,” says Hopkins. “Very few people are afforded the privilege to coach at their alma mater. I want to thank Chancellor Syverud, the Board of Trustees and Jim Boeheim for entrusting me with this great program. Coach Boeheim has created one of the most pre-eminent college basketball programs in the country, one that is committed to a standard of excellence and consistency.”

“Mike has truly earned this honor through his hard work, dedication and commitment to our program for more than 20 years,” says Boeheim. “There is no one more ready or prepared to carry on the success of Syracuse basketball than Mike Hopkins.”

Incoming Director of Athletics Mark Coyle says he supports Chancellor Syverud’s decision to name Hopkins head coach-designate. “During the search process I was fully briefed on all of the athletic programs, including men’s basketball,” Coyle says. “I am impressed by the accomplishments of the entire coaching staff and fully support the Chancellor’s decision.”

Born in San Mateo, Calif., where he played on the 1987 California state championship team at Mater Dei High School, Hopkins enrolled in Syracuse in 1989. Hopkins led the 1991-92 team to the Big East Championship. He was a two-year starter at shooting guard and a team captain as a senior. Hopkins played professional basketball in the Continental Basketball Association with the Rochester (Minn.) Renegades and in Europe with teams in Turkey and Holland following his graduation from Syracuse.

Hopkins joined the Syracuse University coaching staff in 1995 and immediately made his mark on the program. He tutored the Orange guards and was a key to the development of eventual NBA draft choice Jason Hart. Producing top performances out of his charges continued with the efforts of Jonny Flynn, Allen Griffin, Gerry McNamara, Demetris Nichols and Andy Rautins.

Hopkins has handled scouting reports for the Orange; he’s worked with the academic advising office on the players’ academic progress; and he runs the Syracuse Elite Camp. During the summer of 2000 he added recruiting responsibilities to his job description. His efforts on the road have helped the Orange program remain a consistent NCAA Tournament contender.

Hopkins joined Boeheim’s USA Basketball staff in 2000 and 2001 as a court coach for the men’s national 21 and under team trials. He participated in player evaluation during squad tryouts and helped select the squad that earned a gold medal at the world championships in Japan. In 2012, he worked closely with the coaching staff of the USA Basketball squad that defended its gold medal at the London Olympics.