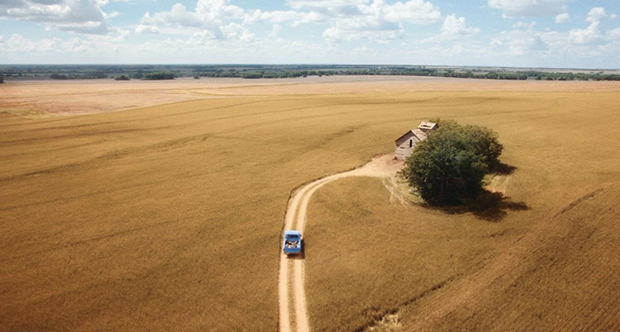 This image is from a commercial for Coke that was produced in part by Luke Rafferty ’16.

Somewhere in Central Kansas, in the middle of a field a few miles off I-70, sits a newly restored barn.

That’s not unusual, considering this is farm country and barns dot the landscape as far as the eye can see. But this barn is different. How it got that way and what took place there, are both a slice of Americana and the story of a lifetime for Luke Rafferty ’16. Rafferty, a student in multimedia photography and design at the Newhouse School and a Remembrance Scholar for the 2015-16 academic year, used the barn as the backdrop for a commercial he produced along with his longtime friend Zach Lowry.

“We set out to create a story about quality, hard work and dreams,” says Rafferty. “We wound up living one.” 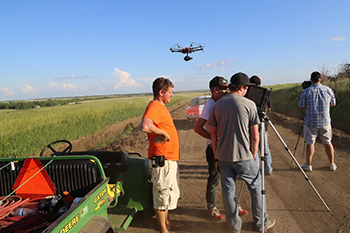 The story got its start in the summer of 2014, when Rafferty and Lowry decided they wanted to take their small video production company to the next level, to “get their name out there,” according to Rafferty. The pair wanted to do something both hardy and American, and decided to create a commercial for Coca-Cola, with the commercial taking place in a Midwestern barn. “After all,” he adds, “what’s more hardy and American than the Coke brand and the Midwest?”

Rafferty and Lowry went about the task of locating the perfect barn, looking on places like Google Earth and Pinterest. The process was moving slowly. So one night, Rafferty decided to load up the car in Syracuse, and along with his mom (“she’s always down for a road trip,” says Rafferty) they took off for Illinois. They departed at 7 p.m. on a Wednesday, drove all night, and arrived at 9 a.m. the next day, at which point Luke began the process of locating farms. “Some told me to get lost,” he says, “but others were more welcoming.”

The problem was, Rafferty still wasn’t finding the right fit. On his way back home, he received word from Lowry about an email from the head of the Kansas Barn Alliance, offering help. The call for action drew thousands of responses, including one from Kevin Kirkwood, a man whom Rafferty describes as “someone with the vision to realize the drive and ambition of two college students.” 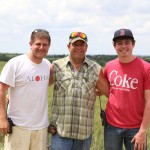 From there, the project moved quickly. Kirkwood located a barn in Chapman, Kan., population 1,394. The barn was perfect for the production. Kirkwood contacted the owner, who gave his blessing, but with one caveat: the barn was scheduled for demolition, and the commercial shoot would have to take place  quickly. Kirkwood quickly assembled a team of helpers (many of them high school friends) that put in 500 man hours to make sure everything looked just right. From there, the video production fell into place.

The commercial tells the story of a grandfather and his grandson who work together restoring an old Ford Mustang found inside the barn, and sharing a Coke while they complete the work. The fruits of their labor can be seen below. But Rafferty says the experience alone was incredibly rewarding, including the warmth of an entire town that embraced the project, even holding a welcome party for the two young men long before the first frame of video was shot.

COCA COLA: QUALITY CARRIES ON from Flex Collective on Vimeo.

While Coke declined to use the commercial on air, the video itself is going viral, with 60,000 views in just one week since it was posted. Rafferty says one reason he believes the video is so popular is because it tells a story. He credits Newhouse Associate Professor Bruce Strong (chair of the multimedia photography and design program) with teaching him the importance of telling a story when approaching a project like this. “It’s what separates something that’s good,” says Rafferty, “from something that’s amazing. The story of our humble production in Kansas last year is one that we will cherish forever.”

As for the barn? It’s staying put. Rafferty says when the owner saw how much restoration work was taking place, he decided he couldn’t go ahead with demolition. If you ever travel to Chapman, Kan., keep an eye out for it. It’s a piece of Americana that will live on, much like Rafferty’s video.