A student in the College of Arts and Sciences has received two major capstone project awards from the Renée Crown University Honors Program. 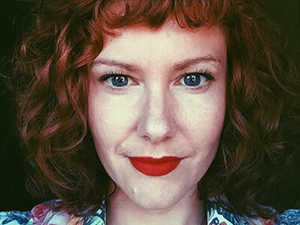 Anastasia Selby ’15 is the winner of both the David Orlin Prize for Outstanding Capstone Project and the Best Capstone Project (Creative) for the manuscript of her forthcoming novel, “The Open Curtain.” Both awards come with cash prizes, totaling $1,500.

“When I came to Syracuse in 2012, I knew I wanted to be a writer, but felt I needed more training,” says Selby, who graduated in May with a bachelor’s degree in English and textual studies. “The honors capstone project gave me the mentoring and resources I needed to complete the fourth draft of my novel. Although I’m far from finished, I was able to condense several years of writing into four semesters and two summers.”

Described by Selby as semi-autobiographical, “The Open Curtain” was inspired by the “journey of grief” that followed her mother’s suicide. Originally, she had planned to write a memoir, but an advanced fiction workshop with Associate Professor Arthur Flowers convinced her otherwise. “He refused to let me write nonfiction,” says Selby, who enrolls this fall in the M.F.A. program in creative writing. “Through getting to know him, and he getting to know my work, Arthur gently suggested I write a novel instead of a memoir.”

Selby decided to make the novel part her honors capstone project, enabling much of her travel and research to be underwritten by a prestigious Crown/Wise Capstone Award. As such, she made considerable headway at the Tin House Summer Writer’s Workshop at Reed College in Portland, Ore., and at the Esalen Institute in Big Sur, Calif.

Probably the biggest perk was having Professor Brooks Haxton G’81 for a capstone advisor.

“She started her honors project with a passionate vision of its possibilities, and she followed through with a dedication singular in my long experience of teaching the most talented writing students in the country,” says Haxton, an award-winning prose writer and poet. “Her project has developed beyond what could have been predicted because she has worked with such intense dedication. She also listens to criticism, and keeps coming back to her writing with new insight.”

“’The Open Curtain’ represents what happens after someone you love voluntarily leaves the world—how there is now a portal, an open curtain, which can beckon to those left behind,” says Selby, who has worked as a wild-land fire-fighter and nanny in Colorado, Oregon, California and Alaska.

While an undergraduate, Selby juggled a variety of responsibilities, including working as a tutor for the Syracuse University Literacy Corps and as a waitress; interning at Salt Hill literary journal; and excelling as a Remembrance Scholar. She hopes to someday serve as a Fulbright English teaching assistant in India.