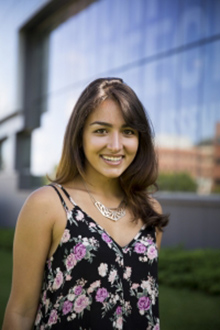 Battipaglia, who is studying broadcast and digital journalism with a minor in political science, won for her story “Squeeze” about the national lime shortage.

The judges said the natural sound took listeners into the grocery store and restaurant she visited to localize a problem that was national in scale, and said the short tracks helped glue the piece together in an informative, yet compelling way.

Battipaglia works as a reporter and producer for NPR affiliate WAER-FM in Syracuse and has interned at News 12 Long Island, CBS News in New York and CNN in Hong Kong.

“We’re delighted to recognize great journalism being done by students across the country with the Student Edward R. Murrow Awards,” says RTDNA Chair Amy Tardif. “This is the first time we have offered award categories specifically designed for students to present their best work, and the entries were outstanding.”

The winners will be recognized at the RTDNA Edward R. Murrow Awards Gala at Gotham Hall in New York City on Oct. 12. Click here to purchase tickets to the event