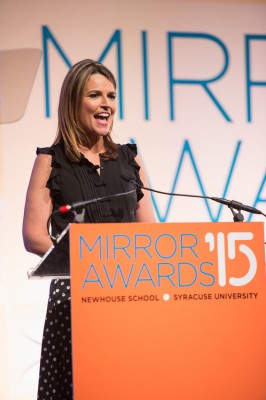 Winners in the ninth annual Mirror Awards competition honoring excellence in media industry reporting were announced today at a ceremony in New York City, hosted by the Newhouse School. Savannah Guthrie, co-anchor of “Today” and NBC News chief legal correspondent, emceed the event, which was held at Cipriani 42nd Street.

In addition to the juried awards, special awards were presented to Josh Sapan, president and CEO of AMC Networks, who was honored with the Fred Dressler Leadership Award; and late New York Times media columnist David Carr, who was honored with the i-3 award for impact, innovation and influence. Bill Persky ’53, award-winning director and producer, presented the Dressler Award. Dean Baquet, executive editor of The New York Times, offered a remembrance of Carr.

For more information about the awards, see http://mirrorawards.com.