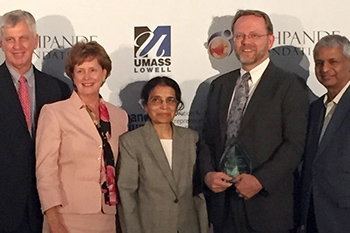 iSchool Professor Bruce Kingma, second from right, accepts the award on behalf of the University at the Deshpande Symposium.

The Deshpande Foundation co-hosts the Deshpande Symposium, now in its fourth year. It brings together thought leaders in higher education to discuss and share their learning on emerging strategies and successful practices that encourage innovation and entrepreneurship within the curriculum, in accelerating ideas to commercialization and engaging students on campus in entrepreneurship. Each year over 300 attendees from nearly 100 different colleges, universities and institutions come together to network, share and learn from each other.

To further reinforce the core areas of focus for the symposium, the foundation solicits nominations of organizations that best exemplify practices in several areas:

The awards committee believes the Raymond von Dran Innovation and Disruptive Entrepreneurship Accelerator is an outstanding example that represents innovation in curriculum to encourage entrepreneurship and is a great example to its peer organizations and future awardees.