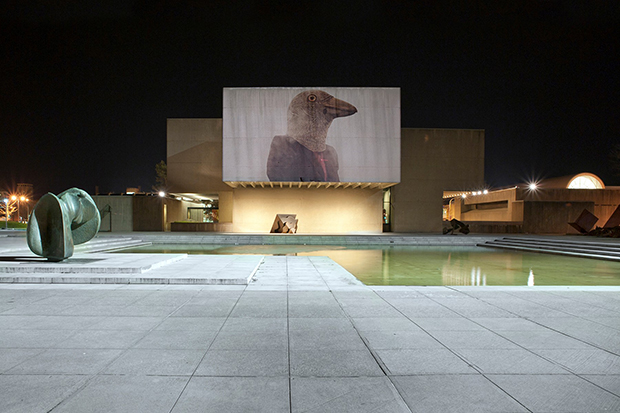 Urban Video Project and Light Work have announced the UVP Summer Review 2015. From mid-June through early September, UVP is screening two programs featuring works from the 2014-2015 “Celestial Navigation: a year into the afro future” program at UVP Everson.

A group program will be on view from June 18-July 4 and July 23-Sept. 5. The group program will include the following works played on a continuous loop: “Isaac Julien: Western Union: Small Boats (The Leopard),” “Sanford Biggers: Shuffle & Shake,” “Jeannette Ehlers: Black Bullets,” and “Cauleen Smith: Crow Requiem.” Due to its longer duration, “Xaviera Simmons: Number Sixteen” will be screened for a limited, solo review screening from July 9 18. Screenings take place every Thursday through Saturday from dusk to 11 p.m. at UVP Everson, located at the Everson Museum of Art, 401 Harrison St., Syracuse, N.Y.

“Western Union: Small Boats (The Leopard)” is a single-channel edit of Julien’s 2007 “WESTERN UNION: Small Boats,” which premiered at the 67th Venice Film Festival. “WESTERN UNION: Small Boats” concerns journeys made across the seas of the Mediterranean by so-called “clandestines” who leave Libya, escaping wars and famines. They can be seen as economic migrant workers, along with certain Europeans—“Angels” in Walter Benjamin’s terms—who bear witness to modernity’s failed hopes and dreams, and who now travel across oceanic spaces, some never to arrive or return. Shot on 35mm film and transferred to digital video, “WESTERN UNION: Small Boats” forms the final installment of his compelling “Expeditions” trilogy, which includes “True North” (2004) and “Fantôme Afrique” (2005). 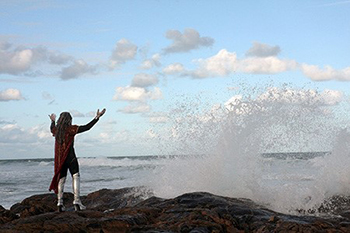 A scene from Sanford Biggers’ “Shake”

“Shuffle” and “Shake” form the first two parts of Biggers’ Odyssean trilogy about the formation and dissolution of identity. “Shuffle” explores the struggle between our own perception of self vs. others’ projections onto us. “Shuffle” also examines how we matriculate through society, often masking our insecurities, pain, longing and the internal schizophrenia of the id. The original soundtrack is composed from the artist’s field recordings made in Indonesia. Both videos feature Ricardo Camillo—a Brazil-born, Germany-based choreographer, stuntman, clown and DJ. In “Shake,” the second video of the trilogy, Camillo walks from the favelas (or shantytowns) of Brazil, to the ocean before finally transforming into an androgynous silver-skinned figure. Biggers’ imagery and narrative simultaneously reference Greek mythology and the quintessential afrofutrist aesthetics of Parliament Funkadelic.

Ehlers’ haunting 2012 video piece, “Black Bullets,” is inspired by the Haitian Revolution of 1791, which led to the creation of the world’s first black republic. Filmed on location at La Citadelle in Haiti, the piece is a tribute to the act of revolt.

Crows have a mythological reputation as tricksters and harbingers of death, but the reality is that they are creatures of remarkable intelligence who lead complex social lives. Smith became fascinated by these misunderstood animals when she noticed the massive flock of crows roosting outside her bedroom window during her artist residency at Light Work in Syracuse. She learned that the native population of crows circulates between Syracuse and nearby Auburn, and that this migration is partly in response to harassment and, at times, state-sanctioned violence at the hands of a human population that views them as a nuisance. Smith interweaves the figure of the crow through the histories of these two cities, both of which were key stations on the Underground Railroad and innovators in early cinematic and 3D optical technologies. “Crow Requiem” connects this history to recent and ongoing violence against people of color at the hands of the state. Shot on location in Central New York, and featuring selections from Onondaga Historical Association’s extensive archive of 19th century stereoscopic images.

“Number Sixteen” is an hour-long, unedited video documenting a performance produced without an audience that engages endurance, abstraction and the energies beneath abstraction. In the video, a vocalist and performer work together in a studio space. The video’s audience becomes witness to a layered convergence: materials and texts, script and chance, sound and image, time and space, the body and its limits. Like the photographic and sculptural works in “Accumulations,” “Number Sixteen” reveals a complex network of accumulated inspirations, cultural allusions and visceral histories.