Project Aims to Raise Profile of Women Architects on Wikipedia

Associate Professor of Architecture Lori Brown hears one question over and over from her female students that she doesn’t have a good answer for. “Years ago, and even now, they ask me why they’re not learning more about female architects in their courses,” she says. 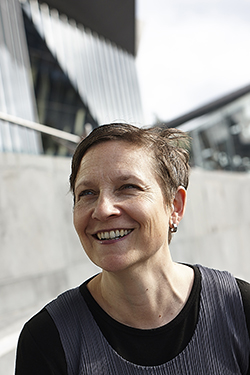 The answer is not that there aren’t interesting women architects to learn about—it’s that they have been left out of the textbooks and other resources. Their accomplishments are unpublicized and, in some cases, forgotten.

When she was a student herself, Brown says, she didn’t encounter very many women as role models. Currently, about 42 percent of architecture students are female, but, says Brown, “Who do you send them to as an example?

“It’s a huge problem that needs a lot of work,” she adds.

Together with colleagues from around the world, Brown is taking a step to help remedy that situation.

She co-founded and co-leads an architecture group based in New York City, ArchiteXX. It has joined together with a group in Germany, n-ails, and a group in Australia, Parlour: women, equity, architecture, to make a concerted effort to write women architects into a popular online resource, Wikipedia. The effort recently received a Wikipedia Project and Event (PEG) grant.

“What has happened over the years is that women may get written in, then sometimes flagged for deletion,” Brown says. “I began to think that this was an area where architecture students and members of the general public could make some headway.”

She explains that the main reason women architects get deleted from Wikipedia over and over again is because they don’t meet the standard of “notability.” In other words, they may not be famous enough, have enough online citations, or have done work that has received enough publicity, in the estimation of the Wikipedia editors. However, Brown adds, this standard can be misleading in the case of female architects. In a field historically controlled by men, the accomplishments of women have often been minimized or ignored. And, “if you’re part of a team, your name may not be even listed,” she adds.

Brown points out that architecture is just one of the disciplines where lack of representation of women is an issue, and that lack of representation of minorities is as much of a concern in all the same disciplines. Wikipedia is emblematic of a much larger problem—there are not enough women included in history books and in teaching of theory. Wikipedia itself has become aware of this problem, which is why this round of funding is geared toward getting more women written into the resource.

The PEG grant is for six months, but the participants hope to show enough progress to get funding for a longer-term project.

“We’ve got so many people interested in doing this,” Brown says. “I’m totally excited and empowered by this and hoping it will snowball.”

Vedyun Mishra G’21, a graduate student in the School of Architecture, has been selected for Metropolis Magazine’s Future100, an elite group of architecture and interior architecture students from the U.S. and Canada. The inaugural award recognizes the top 100 graduating…

When Syracuse University students finish up the fall semester and travel home for Winterlude, they may be left missing the sense of community and intellectual nourishment they get from classes and their friends. To provide students with a unique learning…

The Department of Drama in the College of Visual and Performing Arts introduced its acting and musical theater Class of 2021 today, April 12, via a new website: SyracuseShowcase.com. The website offers a digital version of the department’s annual Lewis…

The John Simon Guggenheim Foundation has announced that Stephen Kuusisto, University Professor in the School of Education and director of interdisciplinary programs and outreach at the Burton Blatt Institute in the College of Law, has been awarded a 2021 Guggenheim…

Light Work presents Meryl Meisler: “Best of Times, Worst of Times,” an exhibition of her photography of her life in and around New York City in the 1970s and 1980s.  Meisler’s exhibition will be on view in the Kathleen O. Ellis Gallery…