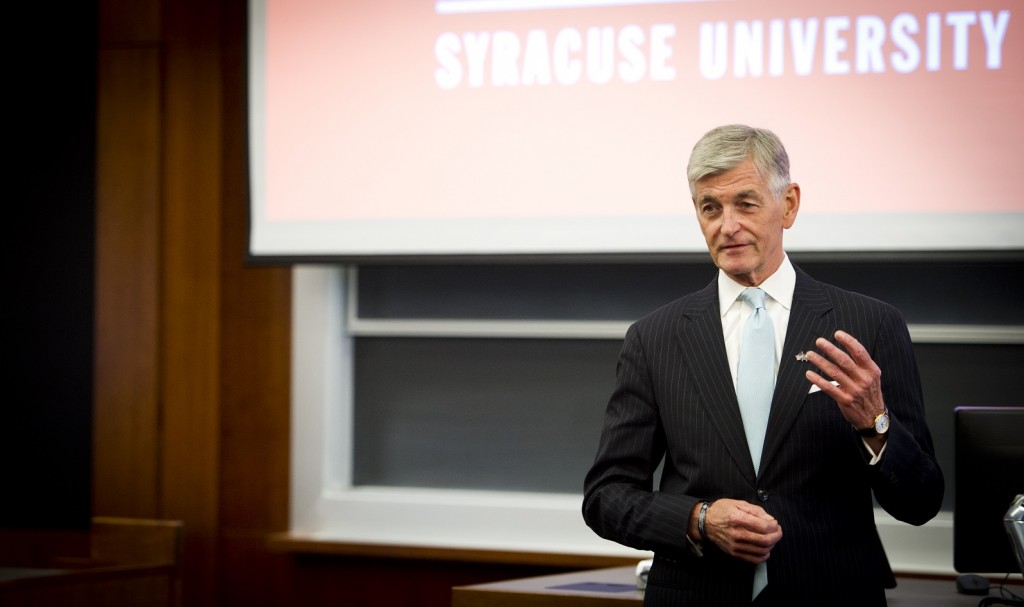 U.S. Secretary of the Army John McHugh speaks at the University Thursday, May 21.

John M. McHugh, U.S. Secretary of the Army and former member of Congress representing Northern and Central New York, visited Syracuse University on Thursday, May 21, to learn more about the Institute for Veterans and Military Families (IVMF) and the many veteran and military-connected programs and services offered at Syracuse University.

Secretary McHugh’s visit included a brief stop at the Martin J. Whitman School of Management, where he received an update on the University’s defense comptrollership program (DCP)—a military degree program that represents a unique cooperative endeavor between Syracuse University and the Department of Defense (DoD)—and spoke with military and civilian members of the DCP Class of 2015. More than 1,600 people have graduated from the program.

McHugh then attended a discussion with the leadership team from the IVMF. The meeting provided an opportunity to brief McHugh on the IVMF, its programs, research, community engagement and collaborations enacted in service to veterans and military families.

An additional morning session followed at the Office of Veteran and Military Affairs, where Chancellor Kent Syverud participated in a review of the University’s efforts to serve veterans, military-connected students and military family members who are students or employees.

“The secretary’s visit to Syracuse University speaks directly to the work we are doing for those who have served the nation in uniform,” states Vice Chancellor for Veteran and Military Affairs and IVMF Executive Director Mike Haynie. “Secretary McHugh is well aware of Syracuse University’s historic commitment to veterans and IVMF’s mission to fully leverage the intellectual, human and social capital of higher education in service to America’s veterans and their families.”

McHugh, in anticipation of his visit to Syracuse, shared, “Syracuse University is a leader in offering timely and rigorous programs designed for the military and for our transitioning service members. I am looking forward to learning more about SU’s efforts in this area, as well as gaining a better understanding of the IVMF’s programs and initiatives and the national impact the institute is having on our nation’s veterans and military families.”