Arts journalist Eric Grode ’93 has been named director of the Newhouse School’s Goldring Arts Journalism Program. He will assume the position July 1. 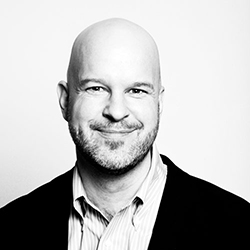 Grode replaces founding director Johanna Keller, who is stepping down as director after 13 years of service. She will continue to teach in the program.

“Johanna leaves big shoes to fill, but I know Eric is up to the challenge,” says Newhouse Dean Lorraine Branham. “I have no doubt the Goldring program will flourish under his capable leadership.”

“Eric Grode is an astute critic, accomplished author, expert teacher and visionary digital journalist,” says Keller. “He is the ideal next leader for this innovative program, and he will be a wonderful mentor for Goldring arts journalists of the future.”

Grode, an alumnus of the Newhouse School, has written about theater and the arts for the New York Times, the Wall Street Journal, New York magazine, the Village Voice, the Boston Phoenix and several other publications. He has served as New York bureau chief of Show Music, associate editor of the Sondheim Review and head theater critic at both the New York Sun and Broadway.com.

In addition, Grode has held editorial jobs at XXL, where he served as managing editor, as well as TV Guide and Good Housekeeping. He has received fellowships from American Theatre magazine and the American Theater Critics Association, and is the author of “Hair: The Story of the Show That Defined a Generation,” the authorized history of the Broadway musical. His second book, “The Big Book of Broadway: 150 Definitive Plays and Musicals,” is forthcoming this summer.

Grode has been an adjunct professor in the arts journalism program since 2012.

The Goldring Arts Journalism program is the first graduate program at an accredited communications school to train journalists to write about arts and culture. Based at Newhouse, the program is an interdisciplinary collaboration with the School of Architecture, the College of Arts and Sciences and the College of Visual and Performing Arts, giving students access to an array of arts and journalism courses taught by writers, academics and artists. The program was made possible by a gift from arts patron and Syracuse University trustee Lola Goldring and her husband, Allen.