The Department of Philosophy in the College of Arts and Sciences has recently produced a bumper crop of published scholars. 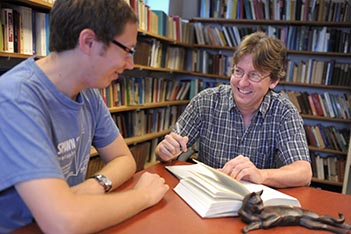 Also, several graduate students have presented papers at highly selective conferences this past year. Among them was Amy Massoud G’15, whose paper, “Moral Worth and Supererogation,” was one of only seven chosen from a pool of 325 submissions for presentation at a Princeton University network and mentoring workshop.

Ben Bradley, the Allan and Anita Sutton Professor of Philosophy and department chair, is impressed by the amount of student success.

“That we’ve had so many Ph.D. students publish in top-notch journals and present papers at major conferences is a testament to their philosophical ability and work ethic,” he says. “These achievements make our students more marketable as they search for jobs in academia, business or industry.”

Case in point: Kirsten Egerstrom G’15 has accepted a one-year teaching appointment at Southern Methodist University (SMU). In addition to finishing a dissertation on meaningless lives, she recently was invited to address the Central and Pacific Division meetings of the American Philosophical Association (APA).

“Kirsten has parlayed her expertise in moral psychology into an exciting opportunity at SMU, which is known for its excellence in philosophy of mind, ethics and moral psychology,” Bradley adds. “We’re proud of her.”

Like Egerstrom, Javier-Castellanos recently presented at the APA Central Division Meeting—in this instance, he discussed the structure of reality. A scholar of metaphysics, he is the author of “Some Challenges to a Contrastive Treatment of Grounding” in Thought: A Journal of Philosophy.

Clancy is interested in ethics, free will and moral psychology. His paper, “A Strong Compatibilist Account of Settling,” offers a viable alternative to the one outlined in “A Metaphysics for Freedom” (Oxford University Press) by British philosopher Helen Steward. Clancy’s article appears in Inquiry: An International Journal of Philosophy.

Cohen also studies ethics and free will, along with metaphysics and philosophy of religion. He has just published three articles: “The Manipulation Argument, at the Very Least, Undermines Classical Compatibilism” in Philosophia; “Agential Settling Requires a Conscious Intention” in the Journal of Cognition and Neuroethics; and “Reasons-Responsiveness and Time Travel” in the Journal of Ethics & Social Philosophy.

A scholar of ethics, free will and philosophy of religion, Steward is the author of two recent articles. “Solving the Lucky and Guaranteed Proof Problems” has appeared in The Leibniz Review and recently won the Leibniz Society’s essay competition. His other article, “Ya Shouldn’ta, Couldn’ta, Wouldn’ta,” is in the journal Synthese, which focuses on contemporary issues in epistemology and philosophy of science.

Timmerman studies metaethics, ethical theory and philosophy of death. His article “Reconsidering Categorical Desire Views” will appear in the forthcoming book “Immortality and the Philosophy of Death” (Rowman & Littlefield), edited by Michael Cholbi. Timmerman is also the author of “Sometimes, There Is Nothing Wrong with Letting a Child Drown” in Analysis and “Does Scrupulous Securitism Stand up to Scrutiny? Two Problems for Moral Securitism and How We Might Fix Them” in Philosophical Studies.

Werner, whose interests include metaethics, ethics and metaphysics, has four articles to his name: “Self-Ownership and Non-Culpable Proviso Violations” in Politics, Philosophy, and Economics; “Seemings: Still Dispositions to Believe” in Synthese; “Character (Alone) Doesn’t Count: Phenomenal Character of Narrow Intentional Content” in the American Philosophical Quarterly; and “Moral Perception and the Contents of Experience” in the Journal of Moral Philosophy.

An ethicist and metaphysician, Wolf is the author of “Giving up Hume’s Guillotine” in the Australasian Journal of Philosophy. The article re-examines the perennial question of whether or not it is possible to derive an “ought” statement from a descriptive statement.