The Department of Public Safety honored 15 of its employees, along with one member of the Students for Community Safety Program and six Syracuse University faculty, staff and students, at the eighth annual DPS Awards Ceremony, held May 11. The awards honored the exceptional achievements of DPS staff members throughout the 2014 calendar year.

The award recipients are:

Officers Frederick Wilson, Kory Wakeman and Nicholas Lostumbo were presented with Chief’s Meritorious Performance Awards for their work preventing an emotionally disturbed student from following through with a suicide attempt in January of 2015. Officer Gregory Scheurer also received a Chief’s Meritorious Performance Award for his proactive location and pursuit of a burglary suspect in a reported burglary in progress off campus. His actions resulted in apprehending the suspect and ended in a positive show-up identification and arrest. 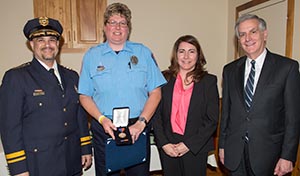 Officer George Wazen received the Grant Williams Excellence in Service Award for his involvement in student outreach and community policing. Wazen organized the “Relieve Some Stress with DPS” tabling event in Bird Library, which provides healthy snacks and seeks student feedback during finals weeks each semester. Wazen also served as a Rape Aggression Defense instructor and co-organized events like a pool tournament at the Goldstein Student Center to reach out to students.

Detective Cleveland McCurty Jr. received the Excellence in Safety and Security Award for his consistent work ethic, his relationship building with community organizations and University community members, his tireless work on DPS Crime Prevention initiatives and the additional services he provides to the Behavioral Consultation Committee conducting background checks and assessments.

Officer John Romano was presented the Outstanding Peace Officer Award for his reliability and willingness to help new and inexperienced officers learn on the job, and for his extensive investigative work addressing a criminal mischief complaint at the South Campus Day Care Center, where a ceramic statue with deep significance to the children attending the center was damaged.

Administrative Assistant Anna Marie Schaap was presented with the Spirit of Justice Award for her work over the years conducting fundraisers for colleagues in need, helping fulfill the quartermaster duties when necessary and generally serving as a “jack of all trades” for the department’s administrative area. 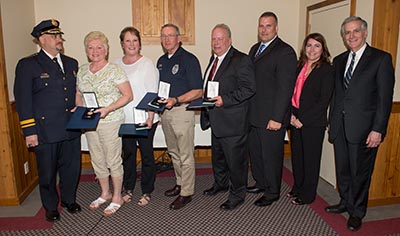 The Distinguished Performance Award was presented to the four members of the department’s Accreditation Team. Accreditation and Grants Manager Andrea Stagnari, Detective Robert Bleyle, Schaap and Accreditation Assistant Peter Laun worked tirelessly for the past several years perfecting the Department’s policies and procedures in preparation for its assessment with the International Association of Campus Law Enforcement Administrators. The Department successfully achieved accredited status in March of 2015.

Detective James Hill received the Vice President’s Award for Excellence in Overall Performance for his consistent work and superior performance in investigating crimes involving sexual and relationship violence. Hill personally worked to build strong relationships between the DPS and the numerous departments on campus that collaborate to investigate incidents and provide assistance to student victims.

John Daney Jr., a student supervisor for the Students for Community Safety Program, was presented a Community Member Recognition Award for his quick action and attention to detail in reporting two suspects acting suspiciously and attempting to steal bicycles from the rack outside Haven Hall. His actions resulted in two arrests. Daney is also a dedicated worker for the program, frequently picking up extra shifts when necessary in addition to his work load as a full-time student.

Matthew Kellar and Brad Bullock of the Syracuse University Lock Shop were recognized for their consistent dependability and positive attitude toward working with the DPS and responding to calls for service at all hours. Kellar and Bullock were the only two employees on duty in the fall of 2014 and spent a large amount of time answering requests for service. 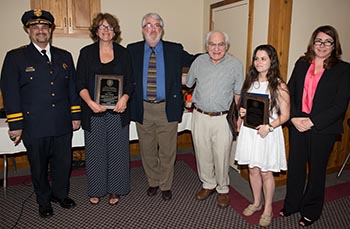 Students Zoe O’Leary and Hannah Mallette and Professor Louis Kriesberg were recognized for their quick and selfless action in rescuing a student from a near-drowning in Archbold Gymnasium’s Webster Pool. Kriesberg alerted the lifeguards that someone had sunk to the bottom of the pool, O’Leary entered the pool and pulled the student from the water, and she and Mallette provided first aid along with Syracuse University Ambulance. The student has since made a full recovery.

Undergraduate student David Jackson was awarded the Grant Williams Memorial Scholarship for his work creating programming opportunities and leadership practice for at-risk youth in the Syracuse area. Jackson has worked for the last two years in the National Youth Recreation Program through Recreation Services, and he actively volunteers in the Syracuse Community at the Syracuse Food Coop, the Martin Luther King Clothing Drive and the 1199 Voters Registration.