Jesse Nissim is having a breakout moment. 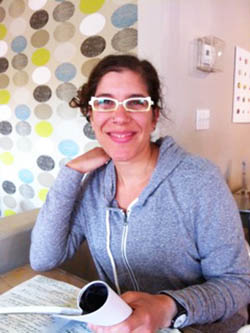 In an industry that thrives on splashy debuts, the poet, who also is a Humanities Faculty Fellow in the College of Arts and Sciences, is reaping the benefits of a steady ascent.

Case in point: Nissim has just published her first full-length poetry collection, “Day cracks between the bones of the foot” (Furniture Press Books, 2015)—not to be confused with her similarly titled chapbook from two years ago. A full-length follow-up, “Where they would never be invited” (Black Radish Books), is in the works for next year.

Meanwhile, the honors keep rolling in for the decorated postdoc, including the 2013 Editors’ Prize from the Spoon River Poetry Review for her poem “Fire,” selected by renowned poet Juliana Spahr. Nissim has also enjoyed residencies at the Ragdale Foundation in Lake Forest, Ill., and the Constance Saltonstall Foundation for the Arts in Ithaca, N.Y.

“As a teacher and poet, Jesse Nissim is making a difference in the literary life on campus,” says Gerald R. Greenberg, senior associate dean of Arts and Sciences and interim director of the Humanities Center. “Her interest in the creative and the critical informs much of what she does in the classroom, particularly with the First-Year Seminars. At the same time, her poetry is highly inventive—as exhilarating as it is original.”

Already, “Day cracks between the bones” has been selected as a finalist for several literary awards, including top prize from the National Poetry Series Open Competition, first prize from the Cleveland State University Poetry Center’s First Book Poetry Competition, the Kinereth Ginseler Award from Alice James Books, the Poets Out Loud Prize from Fordham University Press and the Brittingham Prize in Poetry from the University of Wisconsin Press.

“I love introducing undergraduates to stunning and moving poetry across an aesthetic range, proving there’s no artistic boundary to what a poem can or should do, although we can argue there is an ethical one,” Nissim says. 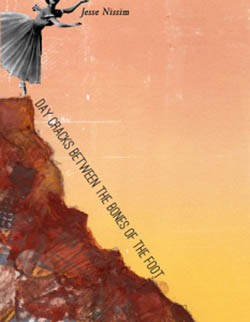 Front cover of “Day cracks between the bones of the foot”

Attention to detail is also important to Nissim. In her appraisal of “SELF NAMED BODY,” poet Heather Christle writes, “There is so much to discover here, thanks to Nissim’s astute … and particular eyes.” Adds poet Elizabeth Robinson: “Where sinew and bone lapse into shadow, Jesse Nissim suggests that the body is the ‘constant motion of being.’”

Since leaving the San Francisco Bay area for Central New York in 2010, Nissim has established a reputation for gilt-edged teaching and research, particularly in contemporary poetry and poetics, documentary methods in poetry, chance operations and poetic experiments, and the process of writing. Among the first-year seminars she has taught are “Lyric Adventures and Poetic Forms,” “Documentary and Investigative Poetics” and “Experiments with Language: Contemporary American Poetry.”

Nissim also teaches creative writing and gives public readings at the Downtown Writer’s Center, which is part of the Arts Branch of the YMCA of Greater Syracuse.

Originally from Baltimore, Nissim has held faculty positions at the University of California, Berkeley; the California College of the Arts; Diablo Valley and Chabot colleges; and San Francisco State University, where she earned an M.F.A. in creative writing.

“There’s a permeability [to her writing], a willingness to attend to the spaces between things, to the gaps in our very selves,” Christle adds.