An eighth event has been added to the lineup for the 2015-16 University Lectures series hosted by Syracuse University. Don Garber, commissioner of Major League Soccer (MLS) and CEO of Soccer United Marketing (SUM), will speak on Tuesday, March 22, 2016, at 7:30 p.m. in SU’s Hendricks Chapel. 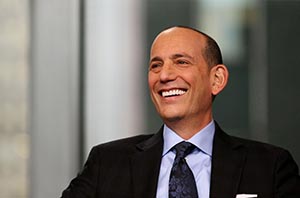 The series is free and open to the public, with American Sign Language (ASL) interpretation and Communication Access Real Time (CART) available at each event.

Garber has been the commissioner of North America’s premier professional soccer league since 1999. During his tenure, MLS has expanded from 10 to 23 teams and added 20 new owners, and more than a dozen new soccer-specific stadiums have been constructed in the United States and Canada.

In 2002, Garber created Soccer United Marketing (SUM), an affiliate of MLS and one of the world’s leading commercial soccer companies, representing the U.S. Soccer Federation, the Mexican Soccer Federation and the Confederation of North, Central America and Caribbean Association Football. In 2014, Garber secured landmark television and media rights agreements for MLS with ESPN, FOX Sports and Univision Deportes, an unprecedented accomplishment for the sport in the United States.

Prior to becoming commissioner of MLS, Garber spent 16 years with the National Football League, finishing his tenure as the senior vice president/managing director of NFL International, where he was responsible for managing all of the NFL’s business outside the United States. Garber began his career at NFL Properties in 1984 and became the league’s director of marketing in 1988.  In 1992, he was appointed the NFL’s senior vice president of business development and was responsible for a variety of television, special event and marketing activities.

Garber serves on a variety of professional and philanthropic boards, including the executive committee of the U.S. Soccer Federation; the Committee for Club Football at Federation Internationale de Football Association (FIFA); and vice president of Hope and Heroes, an organization raising funds and creating programs for pediatric cancer patients and Columbia Presbyterian Hospital in New York.

His appearance for the University Lectures is presented in cooperation with the Department of Sport Management in the David B. Falk College of Sport and Human Dynamics.