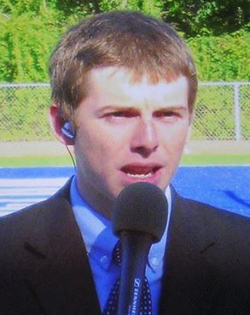 The tradition of producing the top sports broadcasters on radio and TV continues at Syracuse University and its public radio station, WAER.

Five Syracuse students are among the top 20 collegiate sports broadcasters in the nation, according to the Sportscasters Talent Agency of America (STAA). Included in that group is Eric Gallanty ’15, winner of this year’s Jim Nantz Award as the nation’s most outstanding collegiate sports broadcaster for 2015. David Fine ’15, Brendan Glasheen ’15, Jay Alter ’16 and Evan Weston ’15 were also listed among the top 20.

“Having five of the top 20 of the nation’s most outstanding collegiate sports broadcasters come out of Syracuse University enhances our reputation as ‘Broadcaster U’,” says WAER Director and General Manager Joe Lee. “We are particularly proud that all five, including the first place winner, Eric Gallanty, honed their skills at WAER”.

Along with placing five students in the top 20, there were four who earned honorable mention: David Lauterbach ’16, Varun Raghupathi ’16, Evan Stockton ’18, and Jonny Wincott ’16.